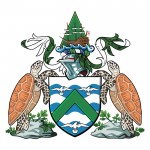 Ascension Island is part of a British Overseas Territory together with St Helena and Tristan da Cunha under the sovereignty of the British Crown.The territory is presided over by a Governor, appointed by HM the Queen, who is resident on St Helena. The Governor is represented on Ascension by the Administrator. A revised Constitution entered into force in September 2009. An elected Island Council advises the Governor on laws, policies and the government’s annual budget.

Ascension Island lies in the South Atlantic (7 56’S, 14 22’W) 700 miles northwest of the island of Saint Helena and covers an area of 34 square miles. The climate is sub-tropical with temperatures ranging from 20-31°C. Showers occur throughout the year with slightly heavier rains in the January-April period. The island is volcanic, and its lower slopes and western side are made up of volcanic ash with little vegetation. Green Mountain, which rises to a height of 2,818 feet at the centre of the island, is lush and green. Despite its small size there is a lot to do on the island. There are numerous walks, scuba diving, and a variety of sports facilities including football, tennis, squash, softball and golf. Sea fishing is also very popular.