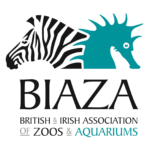 BIAZA – British and Irish Association of Zoos and Aquariums

The British and Irish Association of Zoos and Aquariums (BIAZA) is the professional organisation representing the best of the zoo and aquarium community in Britain and Ireland. Founded in 1966, the Association is a conservation, education and scientific wildlife charity.

With more than 100 members across the UK and Ireland, BIAZA is a professional organisation which represents its members by promoting the values of good zoos and aquariums and acting as their coordinating voice.

BIAZA leads and supports its members to:

A major component of the work of the Association is related to the conservation, research and education role of zoos. This includes managing coordinated breeding programmes, providing support for habitat and species conservation in the wild and inspiring people about the wonder of nature and wildlife.