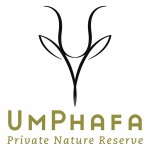 The UmPhafa Private Nature Reserve, situated in KwaZulu Natal, South Africa, is a 6,000 hectare reserve comprised of three farms previously managed for cattle and encompasses a wide range of habitats from acacia savannah and bushveld to mountainous terrain. Due to previous agricultural practices many of the natural inhabiting species had been lost.

Although some mammal populations had remained and have thrived since the reserve was established, many more species have been released and UmPhafa is now home to a wide range of fauna including white rhino, giraffe, kudu, impala, common reedbuck, mountain reedbuck, zebra, blesbok, red hartebeest, wildebeest, waterbuck, nyala, warthog, aardvark and porcupine – to name only some. Leopard and spotted hyena have more recently returned to the area naturally and are regularly recorded through camera trapping, tracking, and – on rarer occasions – sightings!! Small to medium sized carnivores such as black-backed jackal, caracal, serval, genet, and several species of mongoose are also common.