Emily Wilson concludes on her adventure to Africa

By Emily Wilson on 14th October 2011 in Volunteering 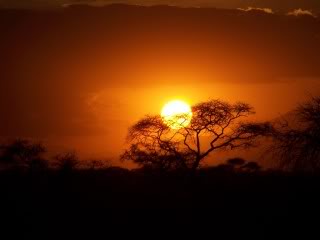 by Emily Wilson
Wildlife enthusiast and volunteer, About Emily

Part 4: The Serengeti and then home

The final instalment of my trip began with us leaving the crater and heading to the Serengeti.  Before leaving the area we stopped at the Oldupai Gorge, famous for its archaeological discoveries of various hominid species from 130mya.  We also visited the “Shifting Sands”, which are controlled by magnetic forces that move the sand a considerable distance, but keep it intact.

When we entered the Serengeti National Park it was the hottest it had been so far, intensified by the barren landscape and lack of shade. Pitching our tents for the next 3 nights, in such a basic campsite with rock hard ground, took 2 attempts and more energy than I really had. I did worry that the heat would be too much for me on this part of the trip, but by sitting on the top of the UniMog, the breeze from the speed of the drive made sure I never overheated. There was always plenty of water too. However, having said this, drinking more water meant we needed the toilet more – and this had its own complications!  On our final day of safari we followed the wildebeest migration all the way to the border of the Maasai Mara in Kenya.  Here there were no proper roads or places to stop, so whereas it was easy for the men to jump over the side of the truck and relieve themselves, the ladies were forced to go behind bushes.  Having selected our bush, however, we were shocked beyond belief to find 6 hyenas running out. When we finally braved it, another 2 came out making us run back to the truck for our lives! We were finally successful after brandishing some long sticks and laughing harder than I ever have in my life.  Looking back I really don’t know what I was thinking, but it was a positively hilarious and unforgettable experience, that’s for sure.

Whilst here, we were also lucky enough to meet 3 famous scientists with published research on species in the area. Marion East explained her studies on Hyena behaviour for the past 25 years; Anna Estes discussed research on the impact of elephants in the local area; and Grant Hobcraft explained the migration of the wildebeest. All were extremely interesting to talk to and very informative.

That evening we celebrated a birthday and the end to our safari adventure with the enjoyment of some local Konyagi (or “Tanzanian Firewater”) which did exactly what it says on the tin to my throat !

After packing up the following morning we headed out of the Serengeti, back through the crater all the way to Mweka.  In leaving the park we were greeted with the sight of two cheetahs, a species not seen so far by our group, and considered it a good farewell from the park.  Another 10 hour journey at Ferrari safari speeds: I lost one chocolate bar and an inflatable pillow to gusts of wind, never to be seen again. However, I comforted myself with the thought that a Maasai warrior is sleeping more comfortably now.  Back at CAWM we were again assigned our own rooms with hot water showers and a bed, which was very much appreciated, I can tell you.  The next day it really dawned on us that that was it for the safari, as we drove 10 hours all the way back to Nairobi.  Arriving at the airport in the evening, we decided to drink to our trip, so the journey was mostly spent asleep or reminiscing the epic experience we had just had.  All I could think was how I couldn’t wait to get home and tell everyone about it, and more importantly charge my camera so I could see all the photos I had taken so far. I knew I would never forget the incredible sights that I had seen.
To any MMU student or simply anyone considering visting Africa, I couldn’t recommend it more.  Thank you to all those involved in the field course at MMU for organising such an enjoyable trip. Many thanks to the College of African Wildlife Management (CAWM)  for the talks from lecturers, park managers and key researchers. The lecturers and support staff that looked after us were so friendly and hospitable, including Kupinga and his team who made the most delicious food for us every day.  Also thank you to Alex Watts, Angel Ortiz, Anthony Lowney, Vicky Armstrong, Simon Dixon, Jilly Dickinson, Kerry Simcock, Mark Worrall and Vikki Sutton for making it such an entertaining trip and one where I made some great friends as a result.

It was a truly incredible trip, which fulfilled all my childhood dreams of visiting Africa. This is a trip I will never forget!