Home › Articles & Blogs › Can Fish Save our Coral Reefs?

Can Fish Save our Coral Reefs?

It is the algae that give coral reefs such incredible colours, and provides food for the numerous species of fish that live there.

By Alex Taylor on 8th September 2011 in Ecology, Marine Conservation 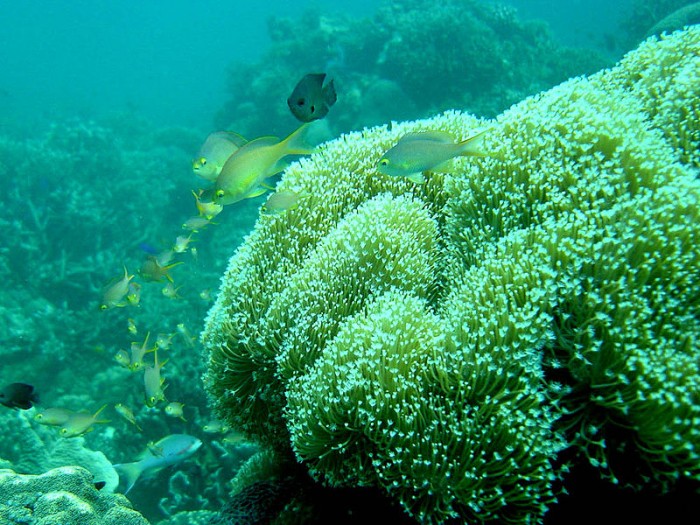 Coral reefs, renowned for their diversity and beauty, have been growing in the world’s oceans for 450 million years. A famous admirer of coral reefs was Charles Darwin who, on his epic voyage on the Beagle, wrote: ‘we feel surprise when travellers tell us of the vast dimensions of the Pyramids and other great ruins, but how utterly insignificant are the greatest of these, when compared to these mountains of stone accumulated by the agency of various minute and tender animals!’

These minute animals are polyps, laying down chalk cups that form the reef. They grow with microscopic algae that photosynthesise sugars using sunlight and nutrients absorbed by the coral. Some sugars are passed back to the coral, maintaining a mutually beneficial partnership. It is the algae that give coral reefs such incredible colours, and provides food for the numerous species of fish that live there.

The reef system is highly sensitive, vulnerable to habitat alteration, siltation, fishing practices, and, of course, global warming. Most of us are familiar with coral bleaching, a process caused by the algae abandoning the coral as it cannot cope with raised sea temperatures, leaving the reef pale and lifeless. However, the opposite can be equally devastating, when the algae grow too much, out-competing coral for space to grow and damaging the reef. This happens when over-fishing removes the fish that feed on the algae and usually keep its growth in check.

Parrotfish are vital to reefs. Where they are present, for example in marine reserves where fishing is banned, damaged reefs show signs of recovery and coral cover increases. However, in heavily fished areas, there is no increase.

Rabbitfish and batfish are two other herbivorous species that feed on thick, well-established algal blooms and can remove much of the algae over short periods of time. These discoveries mean that these fish can be targeted for protection and, by doing so, can help secure the future of coral reefs.

The large size of these fish does make them attractive to spear fishermen, and with rapidly growing coastal populations, they are increasingly under threat. Once a symbol of the beauty of nature, coral reefs are rapidly becoming a symbol of its decline.