It is clear that Gulf’s wildlife is still feeling the effects of the disaster. A federal judge will soon decide the case against BP and other companies for violations of the Clean Water Act.

By Alex Taylor on 27th May 2015 in Man Made Pollutants, Marine Conservation 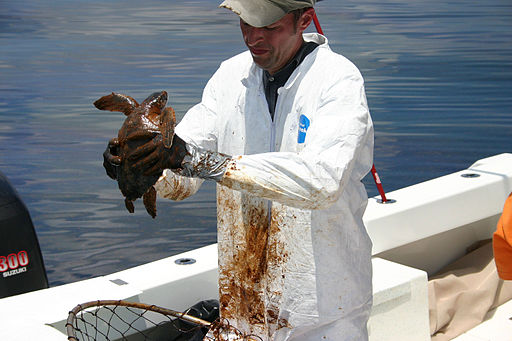 Five years ago, the Deepwater Horizon oil rig exploded and sank in the Gulf of Mexico. Eleven people were killed, and the resulting oil spill was the worst in US history. By the time the well was capped, after 87 days, an estimated 3.19 million barrels of oil had leaked into the Gulf. The oil spread throughout the water column. Some floated to the surface to form oil slicks which spread quickly by being pushed by winds. Some remained in the middle layer, formed because chemical dispersants released into the water to break up the oil allowed it to mix with seawater and stay suspended beneath the surface. Some oil sank to the sea floor by gluing together particles in the water, such as bacteria and phytoplankton, and falling as “marine snow” causing damage to deep sea corals.

The impact of the oil spill on the local wildlife was immediately visible. Sea turtles and dolphins stranded on beaches, fish lay belly-up in brown sludge, and seabirds’ feathers were covered in oil, impeding their ability to fly, feed and find food.

With the five year anniversary approaching, on 20th April, a new report by the National Wildlife Federation has examined how 20 species of wildlife are faring in the aftermath. “Five years later, wildlife in the Gulf are still feeling the impacts of the oil spill,” said Collin O’Mara, president and CEO of the National Wildlife Federation. “The science is clear that this is not over – and sea turtles, dolphins, fish, and birds are still suffering from the fallout.”

Five Years and Counting: Gulf Wildlife in the Aftermath of the Deepwater Horizon Disaster reports the following.

It is clear that Gulf’s wildlife is still feeling the effects of the disaster. A federal judge will soon decide the case against BP and other companies for violations of the Clean Water Act. This will fund projects to restore wetlands, rebuild oyster reefs and protect landscapes – necessary actions to enhance the health of the Gulf to benefit local people as well as wildlife. As O’Mara notes: “Holding BP fully accountable and using all fines and penalties to restore the Gulf of Mexico must be a national priority.”