Disappearance of the Pika

The American pika has died out from a 165-square-mile area of habitat in California’s Sierra Nevada Mountains, due to climate change. 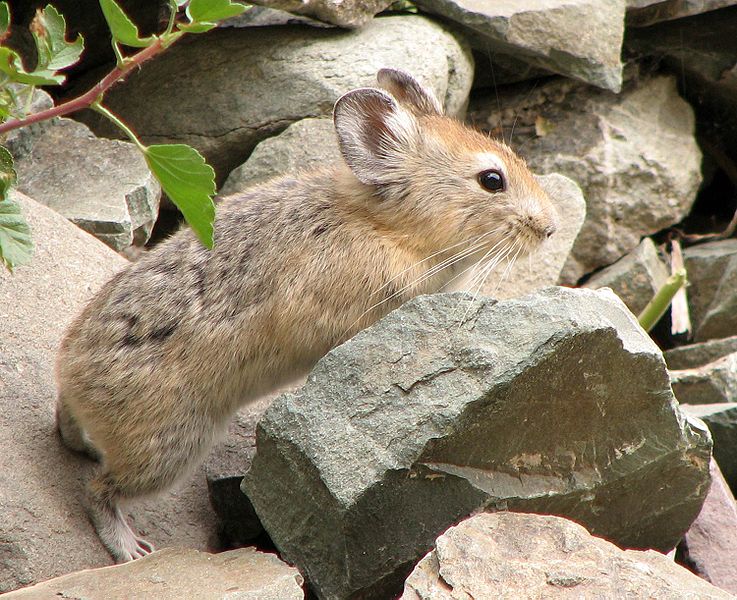 Image: By Karunakar Rayker (originally posted to Flickr as The Pika) [CC-BY-2.0 (http://creativecommons.org/licenses/by/2.0)], via Wikimedia Commons

A new study has documented the disappearance of the American pika, a small mammal adapted to high altitudes and cold temperatures, from a 165-square-mile span of habitat in the Sierra Nevada Mountains. The cause appears to be climate change.

Researchers surveyed pika habitat throughout California’s north Lake Tahoe area and found that pikas had died out from an area that stretched from near Tahoe City to Truckee, more than 10 miles away, and includes Mount Pluto. This local extinction is the largest area of pika extinction yet reported for the modern era.

“The loss of pikas from this large area of otherwise suitable habitat echoes prehistoric range collapses that happened when temperatures increased after the last ice age,” said lead author Joseph Stewart, a Ph.D. candidate at UC Santa Cruz. “This time, however, we’re seeing the effects of climate change unfold on a scale of decades as opposed to millennia.”

Pikas can still be seen in the mountains surrounding the area of extinction. But not for long. According to the study’s forecasts, by 2050 climate change will cause a 97% decline in suitable climate conditions for pikas in the Lake Tahoe area.

Related to rabbits and hares, pikas are about eight inches long with a stout body and round ears. They spend their summers carrying mouthfuls of grass and wildflowers from mountain meadows to ‘haypiles’ tucked away in their rocky habitat, for use as a winter food source. Pikas do not hibernate, but rather use their furnace-like metabolism and thick coat of fur to stay warm during winters under the snow. “A larger haypile acts as insurance policy against winter starvation,” explained Stewart. “But the same adaptations that allow them to stay warm during winter make them vulnerable to overheating in the summer, and when summer temperatures are too hot, they can’t gather enough food to survive and reproduce.”

In order to confirm that pikas are now extinct from the 165-square-mile area, the authors searched for pikas over the course of 6 years, from 2011 to 2016. They looked for evidence of pika activity, in particular pika scat, which can last a long time having being sheltered from sunlight and rain in the rocks.

The study used radiocarbon dating to track the timeline of pika retreat from the area. “Above-ground nuclear arms testing, from before the 1963 Partial Nuclear Test Ban Treaty, resulted in an elevated concentration of radiocarbon in the atmosphere, and we used this signal to determine an age range for the relict pika scat,” explained study coauthor Katherine Heckman, a radiocarbon scientist with the U.S. Forest Service.

Radiocarbon dating indicates that pikas likely disappeared from many of the lower elevation sites surrounding Mount Pluto before 1955, but persisted near the peak as recently as 1991. “The pattern is exactly what we expect with climate change,” Stewart said. “As the hottest, lowest-elevation sites became too hot for pikas, they became restricted to just the mountain top, and then the mountain top became too hot as well.”

The local pika extinction opens a large gap in the species distribution of Lake Tahoe, and the authors of the study believe that this gap indicates the complete loss of population and genetic connectivity between pikas in the east and west.

The American pika is just one of many species threatened by climate change – others include wolverines, tigers, elephants, walruses, salmon, coral reefs and redwood forests. And while management actions such as habitat protection, restoration or assisted migration may be helpful for some climate-imperiled species, options for the pika appear to be limited. “Our hope is that simply getting the word out there that climate change is causing iconic wildlife to disappear will get people talking and contribute toward political will to reign in and reverse climate change,” Stewart explains. “There’s still time to prevent the worst impacts of climate change. We need our leaders to take bold action now.”