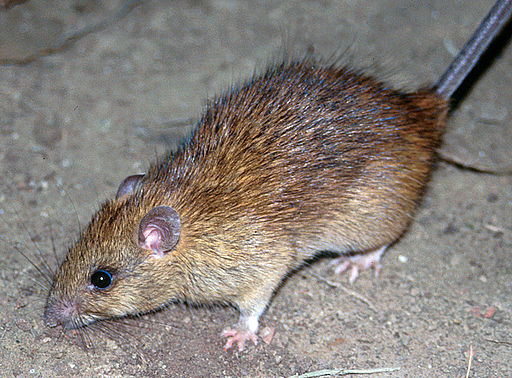 The logging of tropical rainforests is threatening many species, by removing and disrupting their habitat. A new study, published in Biotropica, has highlighted an additional problem for forest inhabitants caused by logging. By creating the habitat conditions they prefer, it encourages black rats to invade and potentially displace native animals.

Black rats have invaded many countries throughout the world since the 1600s, largely due to hitching a ride on European ships. Their invasions have spread disease and been a factor in the extinction of some bird species. But, although they are widespread, they have generally avoided mature forests. This is due to little low-level cover amongst the large trees, and a forest floor that is covered in leaves, noisy enough to alert predators to a rat’s presence.

The new research, led by Imperial College London, has identified that logging makes rainforests more attractive to black rats. Logged forests have a denser undergrowth – providing cover for the rats – and also more fallen wood in which the insects that rats feed on live. These are factors that are good for many small mammals, but it seems that black rats favour them more strongly than native species.

The study was carried out on the island of Borneo, where black rats have been present for decades. They had largely stayed around urban areas but have recently started to enter the margins of rainforests, encroaching on the habitat of native small mammals. The researchers studied how the rats were travelling through forest habitats, compared to the movements of three native species. They caught them in a trap and attached a spool of thin cotton to their backs with a safe, dissolvable glue, and attached the other end of the cotton to the trap site. Upon their release, the cotton reeled out behind the animals, enabling the researchers to follow their exact trails.

This revealed that, of all four species, the black rats had the strongest preference for the disturbed habitats associated with logging. The logging is facilitating their movements into the rainforest, with implications for native wildlife. The study describes this as a synergistic effect, whereby forest disturbance directly threatens biodiversity and indirectly increases the threat posed by invasive species, creating habitat conditions that facilitate the establishment of non-native animals.

“Logging creates micro-environments that black rats love, helping them move in,” said study co-author Dr Rob Ewers from the Department of Life Sciences at Imperial. “This could be bad news for native mammals who might not be able to compete with black rats for food and resources. It’s also bad for the forest, as many small mammals are important seed dispersers, helping rainforest plants to grow, and they are also prey for larger animals.”

However, Dr Ewers says there are steps we can take to minimise the impact of logging. “This study sends a strong message for reducing the impact of logging by minimising the damage to forest structure. For example, trees being felled often pull down neighbouring trees, leaving behind lots of deadwood that is perfect for black rats. Clearing vines that connect trees and accurately aiming where felled trees will land would reduce this debris.”

Further research will be conducted to determine how rapidly populations of black rats are growing, and what the impacts of their invasion will be.