Previously only illustrations from the 1920’s existed. In fact this is the first time the species have been seen in fifty years.

By Guest Bloggers on 13th September 2011 in Nature & Wildlife 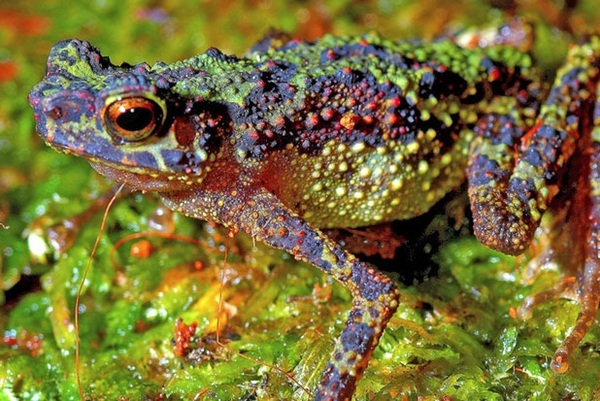 The Rainbow Toad (also known as the Sambas Stream Toad) was thought to be extinct until three of them were discovered up a tree in Borneo by scientists. They have been able to take the first ever photos of this species; previously only illustrations from the 1920’s existed. In fact this is the first time the species have been seen in fifty years.

So how had the toad managed to remain ‘lost’ for so long? The rediscovery was made in a remote mountainous forest area after months of searching. Remote inaccessible areas are believed to be a haven for wildlife because there are no human pressures; logging, development and pollution to name a few. These pressures are the main drivers of extinctions in the 21st century, with amphibians being one of the groups worst affected. In response to this dramatic loss in amphibian species Conservation International set up the Global Search for Lost Amphibians in 2010, which included the Rainbow Toad as one of its top ten most wanted amphibians. Only one other species on the list, the Rio Pescado Stubfoot Toad, has so far been rediscovered. Often inadequate data means it is impossible to know if a species is extinct or not, the IUCN Red List even has a category for ‘Data Deficient’ species and some of the amphibians on the most wanted list are already deemed extinct by the IUCN.

So what are the implications of this species rediscovery? Well although it is great news for the Rainbow Toad it does not counteract the massive loss in amphibian species globally, most of which are a direct result of human activity. There are also fears that the Rainbow Toad will attract poachers who would want to sell this attractively coloured animal to collectors. As such the exact location of the rediscovery has not been disclosed. It does however give hope to conservationists. The Rainbow Toad is living proof that if we can effectively conserve and restrict human development in areas of the natural World then endangered and ‘lost’ species will have a chance at survival.

The Rainbow Toad and Stubfoot Toad are two small, but nonetheless important, victories in the global conservation battle.