The long-held hope that conservation protections granted to pandas will extend to other threatened species in the same habitat has been called into question. New research calls for wider protection for animal communities and ecosystems. 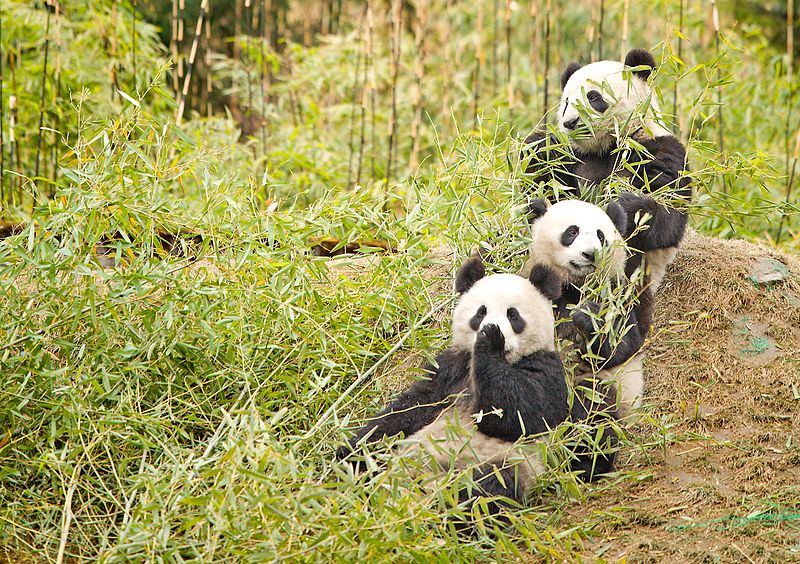 For decades, conservationists have preached that panda popularity, and the resulting support for their habitat, automatically benefits other animals in the mountainous ranges. That logic extends across the world, as animals regarded as cute, noble or otherwise appealing drum up support to protect where they live.

Yet in a study published in the journal Biological Conservation, scientists take a closer look at how other animals under the panda “umbrella” fare and find several species have every reason to be ticked at panda-centric policies.

“The popularity of giant pandas, as of the popularity of other beloved threatened animals across the world, has generated tremendous advances in protecting forests and other fragile habitats,” said Jianguo “Jack” Liu, Michigan State University’s Rachel Carson Chair in Sustainability and an author of the paper. “But this is an important reminder that it can’t assume that what’s good for a panda is automatically good for other species. Different species have specific needs and preferences.”

The authors of “The hidden risk of using umbrella species as conservation surrogates: A spatio-temporal approach” used camera trap data collected throughout mountain ranges to get a clear understanding of what and how animals were using protected habitats.

What they discovered is that while the pandas are doing very well (the species in 2016 was declared “threatened” rather than “endangered” – a conservation point of pride). But three of the eight species focused upon in this study, the Asiatic black bear, the forest musk deer and the Chinese serow (a goat-like animal), seem to have suffered significant habitat loss and/or degradation under panda-centric habitat management.

Asiatic black bears are confined to regions in Central and Southern Asia from Afghanistan to Japan and south to Thailand with a handful of populations also found as far north as Russia. They prefer deciduous forests and brushland at lower altitudes, but the encroachment of human activity on lowland regions from increasing levels of agriculture and growing human settlements has resulted in the remaining populations being pushed into small and isolated pockets of vegetation at higher altitudes. They are also severely threatened by the hunting of them for their body parts that are highly prized in traditional medicines and despite the ban of their hunting in all countries with the exception of Japan, the trade still continues throughout their natural range today. The forest musk deer is currently listed as an endangered species, mainly due to hunting for its musk glands, used in Chinese medicines and for perfumes. They are only found in southern and central China and northern Vietnam, but they are rarely seen because their numbers have been so severely depleted. The Chinese Serow is virtually endemic to China but is so elusive it is almost mystical. It is listed as ‘Near Threatened’ on the IUCN Red List, and is threatened by habitat degradation and land clearing by human activity.

Pandas are picky about where they live, needing lots of bamboo, a gentle slope and no contact with humans. And the managed habitats have largely delivered for them. Just not so much for others.

Fang Wang, the paper’s first author, noted that earlier efforts at tracking how a broader range of animals fared were handicapped by turning a blind eye to different habitat preferences, and not spotting potentially different habitat trends of other animals. The authors suggested that the forests and shrublands in lower elevations next to the habitats that best serve pandas could be better for bear and deer.

“China has made a tremendous achievement in establishing giant panda nature reserves, and now we’re learning that one size does not fit all. China as well as other countries that face similar conservation challenges have the opportunity to move forward from rescuing single species to protecting animal communities and ecosystems,” said Wang.

This study will no doubt add fuel to the fire that is the debate over whether or not pandas are really worth the huge amount of money that goes into conservation work to protect them. Many respected conservationists believe that we should let them slip into extinction – millions and millions of pounds are spent on them, perhaps only because of their cute and cuddly appearance, money that should perhaps be better spend on protecting habitats, or on other species that get over-looked if they are not quite so “adorable” as a panda. They are notoriously fussy eaters, but also fussy reproducers too, and have been very hard to breed in captivity. There are also question marks over the logic of this, given that there is very little habitat for them to be released into, and the bears seem to be used more as political bargaining chips by the Chinese government who ship them to zoos all over the world.

However, there is no denying that pandas are icons of conservation and as ‘charasmatic megafauna’ attract public interest and support for conservation projects, as well as highlighting the threats to biodiversity and what we can do to stop them. It is not the panda’s fault that they have such narrow and specific requirements, they survived very well for thousands of years before we came along, and they are just as deserving of protection as any other living being.

The debate will, I’m sure, continue.