An international team of biologists recently scoured reports and research going back 250 years to identify nine ways humans pose a threat to penguins. 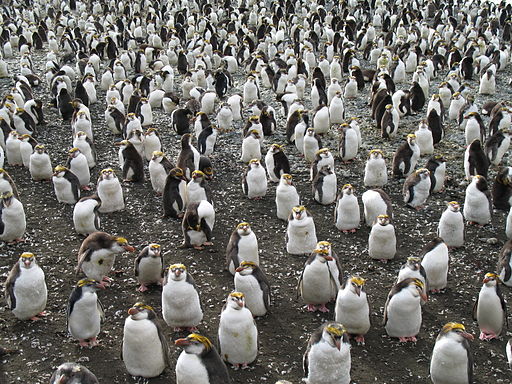 After months spent at sea, Adelie penguins are now returning to Antarctica. To coincide with this, 25th April was World Penguin Day. The day aims to raise awareness for the importance of conserving penguins’ natural habitats.

Penguins are found on every continent in the Southern Hemisphere, from Antarctica to the tropical Galapagos Islands. In the latter lives the species with the lowest population – the Galapagos penguin numbers between 6,000 and 15,000 individuals. In contrast the species with the highest population is the Macaroni penguin, with around 11,654,000 pairs.

Many of the 18 species of penguin are threatened or endangered, and some groups are expected to shrink to 20% of their current size by the year 2100. An international team of biologists recently scoured reports and research going back 250 years to identify nine ways humans pose a threat to penguins. These are egg harvesting, habitat loss, marine pollution, climate change, bycatch and competition from the fishing industry, environmental variability, disease and poisoning from toxic algae, being killed for their oil, skin and feathers and being killed as crab or rock lobster bait.

Climate change is the primary culprit of declining penguin populations. In Antarctica, the annual sea ice melting season has extended by as much as 3 weeks in recent decades. This means that there is less habitat for the penguins and a loss of critical food such as krill, which feed on zooplankton and phytoplankton growing on the underside of sea ice. If the ice vanishes so does the plankton, meaning a lack of food for various species that penguins prey upon.

The most threatened by climate change is the African penguin. This species lives off the coast of the continent and feeds on rich supplies of anchovies and sardines that follow a nearby current of cold water. As the ocean gets hotter, this current is moving further away from land. The penguins can only swim up to 25 miles from their home, so they will not be able to reach their food source if it moves any further away.

Penguins are top predators, so are considered to be sentinels of changes in their environment. In Antarctica, penguins spend so much of their time in the ocean and are at the top of the food chain so any variations in their populations may represent larger changes to the ecosystem. That’s why the University of Oxford, in partnership with the Australian Antarctic Division, has set up a project called Penguin Watch. It was launched in September last year in order to measure year-round changes at a range of study sites.

Despite over a hundred years of study in the Southern Ocean there are serious data gaps and there is little baseline information against which to measure change. Penguin Watch involves a camera-monitoring programme consisting of 50 cameras set up throughout the Southern Ocean and along the Antarctic Peninsula. They are recording colonies of Gentoo, Chinstrap, Adelie and King penguins, taking photographs of the animals all year round. This enables scientists to determine the health of the colony by obtaining nest survival rates while also observing novel behaviours, such as where penguins spend their winter months.

The project also enables penguin lovers across the world to be involved with the research. Hundreds of thousands of images taken over the past three years have been made available to the public. By counting the number of adults, chicks and eggs in each image, quantifiable data can be extracted and used by the scientists to monitor any changes. This can also aid in “training” a computer programme to recognise individuals which is being developed in order to automatically count every penguin in an image.

Penguin Watch will reveal how often penguins feed their chicks and how long they have to go to sea to feed in different regions. In the past, this was only possible by putting GPS trackers on the penguins. Lead researcher from Oxford University Dr Tom Hart said: “The hope is that, by developing a non-invasive method, we can track penguins across the whole of the Southern Ocean without researchers needing to disturb them.”

So far, more than 1.5 million volunteers have clicked on 175,000 images. To coincide with World Penguin Day, the scientists have released some early findings from their analysis. “What they’ve found in the Peninsula is that the penguins are coming back to their breeding sites in the dead of winter and these are penguins that normally are thought to leave their breeding sites and go forage at sea for the entire time of the winter. We don’t know why they’re coming back but it’s the first time it’s been observed,” explains Dr Colin Southwell, an ecologist with the Australian Antarctic Division.

He says the cameras will allow them to monitor the success of the penguins’ breeding season and how it varies in different regions. “In East Antarctica, for instance, we’ve found that in some regions the breeding success is incredibly variable from one year to the other, sometimes they’ll churn out lots of chicks, other times there’ll be almost complete failure. Whereas in other regions the breeding success is high all the time, so it’s telling us something about what drives those populations and what could impact on them and how it could vary from place to place and time to time.”

In addition, with fisheries management being a potential threat, the project can gain a better understanding of this issue. Dr Southwell said: “Penguins and other seabirds breed on land so they’re accessible, but they forage in the ocean and are then subject to impacts from anything that’s affecting their food supply. So one thing is that they’re easy to study, another thing is that they’re an iconic species. Everyone knows about penguins, everyone seems to love penguins, so they capture people’s attention and so if we’re trying focus people’s attention on important issues like fisheries management they’re a good species from that point of view.”