Until very recently it was believed that evolutionary processes only happened over very long periods of time, but these findings indicate that the presence of a non-native predator can induce a process of rapid evolutionary change in a native species. 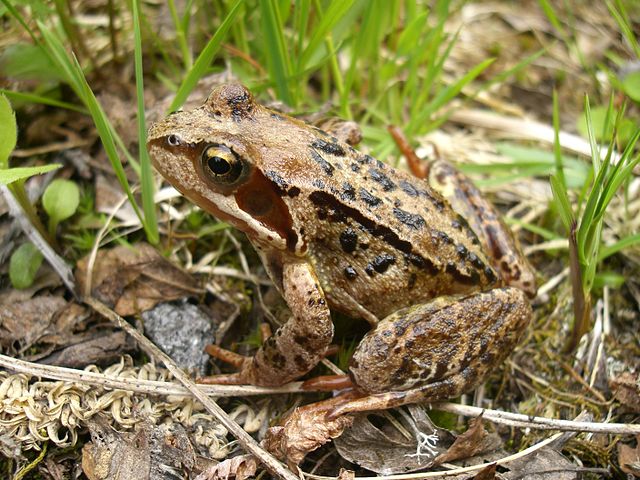 The Red Swamp Crayfish is native to north Mexico and southern USA, where it is a feature of many menus. It’s also a popular export among aquaculturists, but thanks to deliberate introductions in many parts of the world including China, Portugal and Spain, it is now loose in the wild and destroying native species. It is territorial and aggressive, which makes it a very strong competitor and, unlike many other crayfish species, it is not vegetarian.

One of its prey items is the larvae of the Common Frog, which lives on the Iberian Peninsula. The crayfish was first recorded in Extremadura and Andalusia in the 1970s, but has since spread throughout the entire Peninsula due to a high number of wetland areas. It comes into contact with the Common Frog in areas of permanent water, where the frog prefers to reproduce.

A new study published in the journal Ecology has examined the interaction between these two species. Scientists from the University of Uppsala in Sweden aimed to find out whether a long period of co-existence with the crayfish could influence the type of defensive response developed by the larvae of the frog.

They collected recently laid frogspawn in five different locations in southern Portugal. In two of them, the frogs and crayfish has co-existed for more than 30 years, which was deemed to be long-term co-existence. In another location, they had been co-existing for 20 years (short-term co-existence) and the last two locations where in areas which had not been colonised by the crayfish, so were populations without co-existence.

The larvae from the five populations were raised under experimental conditions in either the presence or absence of crayfish. The crayfish were fed with frog larvae so that they produced chemical signals indicative of predation which would be detected by the larvae. The behavioural and morphological responses of the frogspawn were then analysed.

The results showed that populations that had co-existed with crayfish for 30 years presented a pattern of activity that was completely different from the populations which had less or no co-existence. Germán Orizaola, who led the study, explains: “A long coexistence with the predator generated extraordinarily reduced patterns of activity, even in the absence of the predator. This would help the larvae to go unnoticed, which would help to increase its chances of survival.” It took the frogs just 10 to 15 generations to evolve the response of being less active in the presence of crayfish. By contrast, the other populations were five times more active, and more likely to be noticed by the crayfish.

The larvae of populations with longer co-existence had also changed their morphology – they had deeper tails and bigger body volumes. “These two responses would allow them on the one hand to direct the attacks of the predator to less vulnerable areas of their body like the tail fin and, at the same time, maintain a larger digestive area to counteract the potential negative effects of lowered activity,” said Orizaola.

Until very recently it was believed that evolutionary processes only happened over very long periods of time, but these findings indicate that the presence of a non-native predator can induce a process of rapid evolutionary change in a native species. Invasive species can seriously affect the balance of an ecosystem so the fact that native species can adapt is encouraging. However, not all species can – it has been proved that in the same area, the endemic Iberian Parsley Frog is unable to respond to the presence of crayfish. Orizaola says: “Better knowledge of the magnitude and time scale of the evolutionary changes is the key to properly understanding the biological processes and for correct development of efficient conservation measures.”