Research has shown that 85% of species are effected by forest fragmentation. While some benefit from the breaking up of forests into small isolated patches, many species lose out – often those that are most endangered. 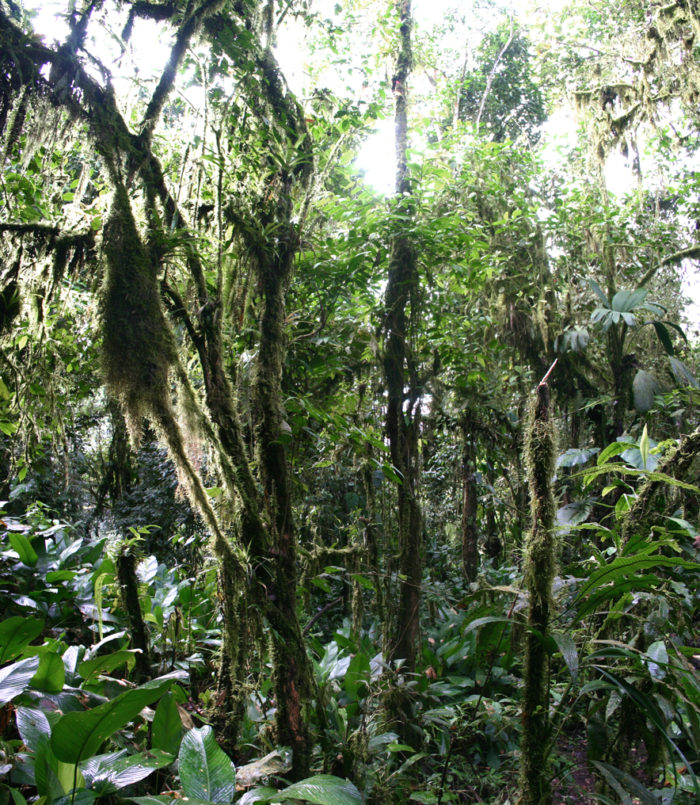 Image: By User:Hjvannes (Own work) [GFDL (http://www.gnu.org/copyleft/fdl.html) or CC-BY-SA-3.0 (http://creativecommons.org/licenses/by-sa/3.0/)], via Wikimedia Commons

Deforestation is breaking up rainforests into small, isolated patches and forcing more species to live at the forest edge. While some species flourish in the changing environment, those that are dependent on the forest core are being pushed to the brink of extinction.

Research led by scientists at Newcastle University and Imperial College London has documented how biodiversity is changing as a result of deforestation. The results were recently published in the journal Nature.

Based on data for over 1,500 forest vertebrates, the team found that 85% of species are now being impacted by forest fragmentation. The winners are those that seek out the forest edge, while the losers are those that rely on the forest core and whose habitat is being constantly squeezed.

The team is now hoping to use this knowledge to inform forest conservation and restoration efforts, by developing a system to predict which species are likely to disappear first from changing forest habitats.

Dr Marion Pfeifer, lead author now based at Newcastle University, explains: “Tropical forests and the animals they harbour are being lost at alarming rates but in order to protect them we need to know exactly how fragmentation of the land is impacting on the animals that live there. This is critical for the hundreds of species that we identified as being clearly dependent on intact forest core areas – that is forest which is at least 200-400m from the edge. These include species such as the Sunda pangolin (Manis javanica), the Bahia Tapaculo (Eleoscytalopus psychopompus), the Long-billed Black Cockatoo (Zanda baudinii) and Baird’s tapir (Tapirus bairdii). These species were highly sensitive to the changing habitat and therefore more likely to disappear in landscapes that encompass only a small proportion of intact forest.”

Half of the world’s forest habitat is now within 500m of a ‘forest edge’ due to the expansion of road networks, logging, agriculture and other human activity. These edges are very different from the rest of the forest – with more light, less moisture and generally higher temperatures.

Using species’ abundance data collected from fragmented landscapes worldwide, the team analysed 1,673 species of mammals, birds, reptiles and amphibians to see how they respond to edges. And with new spatial and statistical analyses they were able to show that 85% of species’ abundances are affected in some way, either positively or negatively, by forest edges.

Edge effects create species communities near edges that bear little resemblance to the communities of forest interiors, and this species turnover likely reflects dramatic changes to the ecological functioning of modified forest habitats.

Robert Ewers, Professor of Ecology at Imperial College London, explains: “About half of species win from the forest change; they like the edges and so avoid the deep forest, preferring instead to live near forest edges. The other half lose; they don’t like the edges and instead hide away in the deep forest. The winners and losers aren’t equal though. Some of the species that like edges are invasive like the boa constrictor, while the ones huddled into the deep forest are more likely to be threatened with extinction – like the Sunda pangolin.”

“Our analysis allows us to track species’ abundances in response to edge effects to predict the impact on biodiversity caused by forest loss and fragmentation,” adds Dr Pfeifer. “This is useful for land management and as a tool to help guide our conservation efforts. The next step is to use this data and our software to allow managers to create ‘optimal landscapes’ that combine forest use with biodiversity conservation.”