The critically endangered Seychelles paradise flycatcher has been successfully relocated to another island, a crucial milestone in the recovery of a bird seriously threatened by habitat loss. 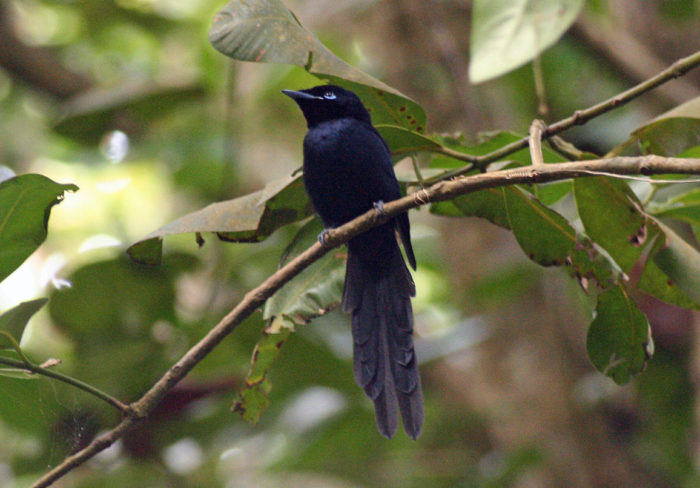 A team led by a conservation biologist from the University of Kent has successfully relocated threatened Seychelles paradise flycatchers to a different island to help prevent their extinction.

Four females and two males were caught on Denis Island and taken to Curieuse Island, where they joined 11 males and nine females who were moved there from La Digue Island at the end of last year. Four weeks after that release, the first birds had nested, with the first chick recently fledged.

The project was led by Jim Groombridge, Professor of Biodiversity Conservation and Head of Kent’s School of Anthropology and Conservation (SAC). Dr Rachel Bristol, who completed her PhD at the Durrell Institute of Conservation and Ecology (DICE) in SAC managed the project in partnership with the Seychelles National Parks Authority. The project was financed by the UK Government’s Darwin Initiative.

The move was a complex process. First of all, they had to catch the birds using mist nets and delicately mark their tails so that each bird was identifiable (at least until their next moult). Blood samples were taken before they were transported in well-ventilated recycled cardboard boxes, complete with perch, on a plane to Praslin and then by boat to Curieuse. On arrival they were given rehydration and energy fluid before being released by hand.

The Seychelles paradise flycatcher is currently ‘Critically Endangered’ on the International Union for Conservation of Nature Red List of endangered species and conservationists hope that successfully establishing this additional population on Curieuse Island could mean they are down-listed to a less endangered category. The bird has very specific habitat requirements and is suffering from habitat loss and fragmentation caused by development and the increase in tourism.

The first ever conservation introduction of the Seychelles paradise flycatcher, from La Digue to Denis Island, was undertaken by the team in 2008. It was so successful that the population there has grown considerably from the 23 translocated individuals to the current estimate of over 85 birds. It is from this population that the conservation team were then able to source some of the birds for this second transfer to Curieuse Island, the rest coming from the relict population on La Digue Island.

Professor Groombridge said: “This is such a positive start for this new population. The translocation is a crucial milestone in the successful recovery of this critically endangered bird, and represents a highly successful long-term international collaboration between the Government of Seychelles, local conservation partners and DICE at the University of Kent, and will hopefully lead to a more secure future for this beautiful bird. Successes like this are part of what I teach to our Wildlife Conservation BSc students as these cases require a real understanding of how to bring species back from the brink of extinction.”