In some good news, leopard populations in the Serengeti are healthy, and show similar numbers to other protected areas. However these do vary by season, believed to be due to the abundance of prey animals. 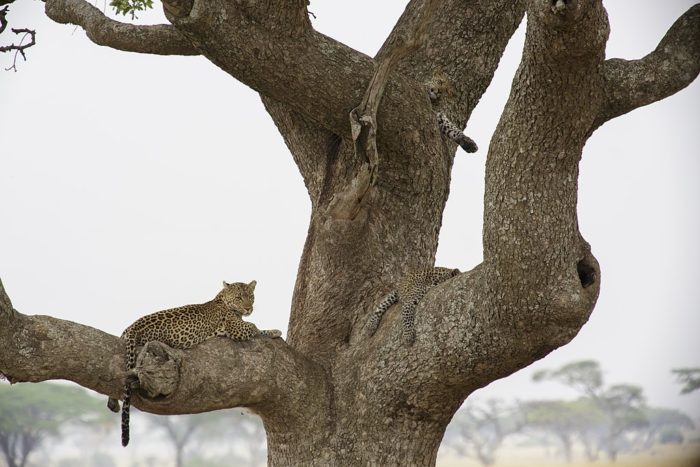 A study of camera-trap data from Serengeti National Park in Tanzania found that leopard population densities in the 3.7-million-acre park are similar to those in other protected areas but vary between wet and dry seasons. The fluctuations appear to be driven by the abundance of prey and how this affects interactions with other large carnivores like lions.

Despite the long history of wildlife research in the Serengeti, this is the first peer-reviewed study of leopard densities in the park, said Max Allen, a carnivore ecologist with the Illinois Natural History Survey at the University of Illinois, Urbana Champaign who led the research. Allen and his team analysed data from Snapshot Serengeti, a large collaborative effort that uses hundreds of camera traps to collect data on large cats and other wildlife in the Serengeti. The team published the new findings in the journal Biodiversity and Conservation.

Allen says: “In the wet season, when potential prey species like Thomson’s gazelle and impala are available in abundance, leopards appear at higher densities. In the dry season, leopards seem to work harder to avoid other large carnivores that compete with them for less abundant food. We found 5.72 and 5.41 leopards per 100-square-kilometers in the wet and dry seasons, respectively. These densities suggest the leopard populations are at moderately healthy levels in the Serengeti. This reflects the importance of large conservation areas for large carnivores, as leopard populations are generally declining across their range.”

The team used analytical techniques to estimate leopard densities for each camera-trap site and for the study area overall. However, the data was provided by Snapshot Serengeti, a project Allen describes as one of the most effective citizen science projects in the world. Their cameras track the movement of thousands upon thousands of animals migrating with and following the wildebeest migration. Anyone can go onto their website and identify the animals that can be seen in each photo taken by a camera trap, as well as record the animal’s behaviour. And there are plenty of tools to help with the identification process. You can help by going on their website – Snapshot Serengeti.

Understanding how carnivore populations are faring and what factors contribute to their success is essential to conserving them and the other wildlife in their ecosystem, Allen said. Capturing data about their habits through unobtrusive camera traps can lead to better management of the wild areas on which they depend.

Allen continues: “Large carnivores at the top of the food chain play important roles in ecosystem regulation, and disease and population control. The human-induced changes to habitat availability and quality are accelerating the decline of large carnivores, which are already vulnerable because they have naturally low population densities at birth.”