The Historic Decline of the Grey Partridge (Perdix perdix)

This species has declined across the length and breadth of Europe, showing a decrease in population size ranging from 1% to 80% between 1990 and 2000.

By James Common on 4th April 2016 in Bird Conservation, Ecology 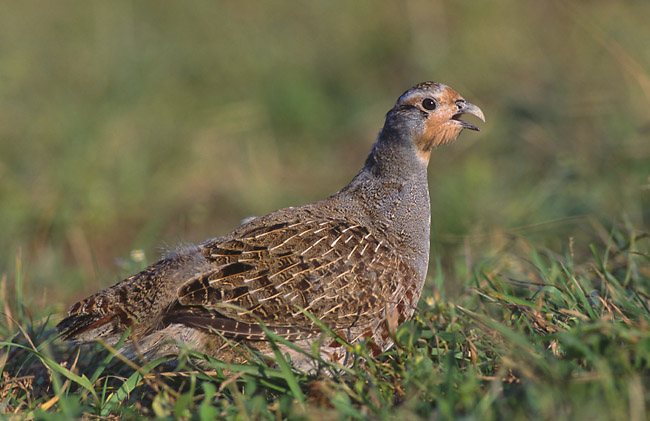 Living where I do, secluded in a reasonably rural area of Northumberland, Grey Partridge (Perdix perdix) are still, thankfully, rather abundant. Indeed, many an evening stroll is accompanied by the guttural croaks of amorous male partridge and any venture into nearby farmland carries the risk of a mini-heart attack, induced by erupting covey’s vacating their grassy abodes. Up here in the North, you would be forgiven for assuming that this species is actually doing rather well – they are certainly easy enough to come by, all be it with a little effort. The fact of the matter remains however that the Grey Partridge, once one of our commonest and most widespread game birds, has declined massively. The history of this charismatic farmland denizen an overtly solemn one and the future of this much loved species, still undecided.

The Grey Partridge was once the most widespread and heavily exploited game bird in the UK; its historic fondness for grassy steppe habitats allowing it to adapt readily to cultivated ecosystems. Indeed, during the 18th and 19th century, aided by an increase in arable farming, land enclosure and widespread predator control the partridge population expanded considerably. So much so that between 1870 and 1930, upwards of two million Grey Partridge were shot in the UK each year (Tapper, 1992). The latter representing a number that may, at first, sound unsustainable but one that had little impact on the overall population of P.perdix at the time- a testament to the health of the UK population in the last century.

Like many farmland bird species, the Grey Partridge has not fared well in modern times (Tucker and Heath, 1994) – the population high prior to 1930 now, sadly, a thing of the past. This species has declined across the length and breadth of Europe, showing a decrease in population size ranging from 1% to 80% between 1990 and 2000 (Kuijper et al, 2009) with the UK showcasing one of the most pronounced downward trends. The decline ofP.perdixappears to have taken place in three distinct stages; a stable period characterized by high hunting bags, often 100 partridge per square kilometer between 1793 and 1950 followed by a rapid decline between 1950 and 1970 (Kuijper et al, 2009). The latter made apparent by a sharp decrease in the size of hunting bags (Potts & Aebischer, 1995). The third and final stage, from 1970 until the present day, shows a slower, gradual decline in partridge numbers across much of the UK (Potts, 1986). For once, the reasons for this decline appear clear and much research has been carried out on the subject, some of which I will attempt to summarizes here.

The initial population crash, the one that took place in the UK between 1950-70 has been largely attributed to a rapid decrease in chick survival rate (Kuijper et al, 2009) –something observed right across Europe during the first years of partridge decline (Potts, 1986). This apparent increase in mortality coincided with an increase in the use of pesticides to prevent agricultural crop damage, among these; herbicides, insecticides and fungicides. Whereas prior to 1950 only 7% of crops were sprayed in this manner, by 1965 more than 90% were exposed to pesticides (Potts, 1986) – coinciding perfectly with the drop in partridge numbers. Such chemicals may affect birds in a number of ways, firstly through direct poisoning of the partridge themselves though little evidence exists to support this theory and instead the indirect implications of pesticide use are thought to have played a bigger role (Kuijper et al, 2009).  Such pesticides have been shown to directly affect adult partridge through the removal of preferred food sources, among these; chickweed and black bindweed, and the removal of insect prey on which partridge chicks depend. A number of studies, including those of Moreby et al (1994) and Taylor et al (2006) have found a direct link between pesticide use and chick food availability – supporting the conclusions of Potts (1986) and others. As it stands, pesticides and their associated impact on the food chain in farmland ecosystems may well be the driving factor behind the decline of the Grey Partridge in the UK.

Habitat loss is also cited as a major factor in the pre-1970 decline of Grey Partridge in the UK (Kuijper et al, 2009; Potts 1986). During these initial crashes, habitat quality in agricultural ecosystems began to deteriorate; hedgerows and unmanaged areas largely removed as farming practices intensified. This removed vital breeding habitat for Grey Partridge who depend on such cover for protection from predators (Rands, 1987). Of course, the removal of such habitats also removed yet another valuable food source and thus can be closely linked with previous talk of chick mortality. In short, the way we managed our farmland prior to 1970 was irafutably to blame for the decline of P.perdix. But what about post-1970?

Whereas pesticides and habitat alteration and the resulting decrease in chick survival rate were surely to blame for declines prior to 1970, studies have shown these are not responsible for the continued decline in modern times (Potts & Aebischer, 1995). Instead it is believe that a decline in nesting success is to blame for this sustained downward trend, increased predation to blame for a rise in both the mortality of incubating hens and the eggs themselves (Kuijper et al, 2009). This increase coinciding with a decrease in gamekeeping operations and thus, predator control since the 1970s (Potts, 1986) – the resurgence of corvids, mustelids and foxes likely limiting partridge breeding success in many areas. It therefore stands to reason that Grey Partridge do indeed benefit from gamekeeping operations and the subsequent predator control that takes place – something not to dissimilar to the situation with breeding waders on driven grouse shoots. One study in particular, conducted by Tapper et al (1996) showed a 3.5 fold increase in Partridge numbers on a site where predators where intensively managed – concluding that control of natural predators is a viable conservation tool alongside habitat restoration and reduced pesticide use.

Whereas the game shooting industry does have to potential to benefit P.perix it should be noted that shooting operations may also have factored into the decline of the species (Kuijper et al, 2009). The release of both Ring-Necked Pheasant and Red-Legged Partridge – now a very common practice – can be detrimental to partridge stocks (Tomkins et al, 2000). Pheasants and Grey Partridge share a common parasite, the caecal nematode, which while having little effect on pheasants has been shown to reduce the body condition of partridge -likely resulting in reduced breeding success (Tomkins et al, 2000). The continued release of these two species also leads to many wild Grey Partridge getting caught up in shooting drives and can lead to unsustainable levels of adult mortality (Watson et al, 2007). As a result of this, partridge declines have been more pronounced one estates that rear and release these species (Aebischer and Ewald, 2004). Finally, Leo et al (2004) concluded that shooting has in fact lead to the localized extinction of many Grey Partridge populations and threatens many more. It should be noted however, that banning the shooting of Grey Partridge could be counter productive and may not actually help halt the decline. The impacts of shooting and the benefits of predator control balancing each other out somewhat in certain locations (Watson et al, 2007).

The decline of the Grey Partridge in the UK (and across Europe) can be attributed to a number of causes. Firstly; low chick survival due to habitat loss and the increased used of pesticides leading to steep population declines prior to 1970. Though steps have been taken to counteract these measures, partridge continue to decline – the latter drop in numbers being attributed to an increase in natural depredation, at all stages of the birds life cycle. Furthermore, conflict with invasive pheasants and over-shooting – at times inadvertently, may be limiting the recovery of this species.

Much is now being done to counteract the worrying decline of this iconic farmland bird, the Game and Wildlife Conservation Trust in particular biting the bullet and trying to halt the trend. If you yourself wish to do something to benefit this species, taking part in the GWCT’s Partridge Count Scheme or helping out with localised counts would be a good place to start. Information on both of these found here. http://www.gwct.org.uk/research/species/birds/grey-partridge/. I shall touch on the subject in more depth in the future but looking at the causes the means to protect our remain partridge remain clear. Replenish degraded habitat, switch to a more organic way of farming (as many have done) and, perhaps more controversially, manage predators in areas where partridge populations are at particular risk. The issue with pheasants is a little harder to tackle and it would certainly be interesting to see just what is having a greater impact on partridge stocks – parasite transmission via  pheasants, or depredation. It may not be possible to control both these factors in the same areas, one seemingly at odds with the other, though with more research perhaps a means to do this may become clear.