Scientists studying African White-backed vultures have discovered that one reason for their decline in numbers is lead poisoning from ingesting hunters bullets. 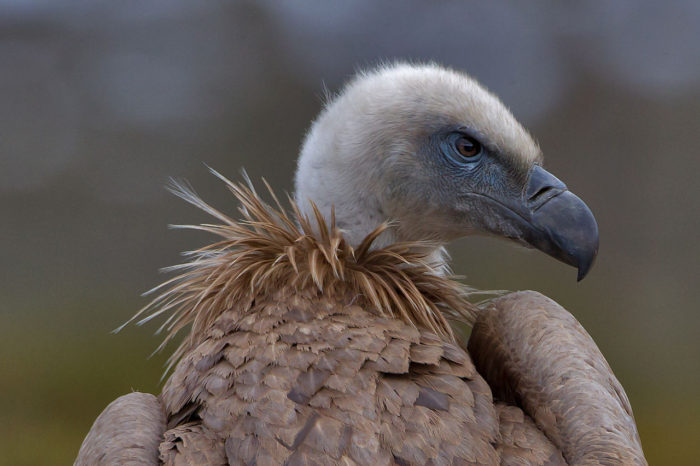 Vultures don’t tend to have the best reputation, and are often portrayed in a negative light. The public often perceives them to be associated with death and decay, unattractive birds that circle helpless prey. They certainly don’t receive the compassion we feel for cute panda or the majestic lion. Yet for those who understand and love vultures, they are known as ‘Nature’s Clean-Up Crew.’ They are nature’s most successful scavengers, cleaning up our landscapes and playing a vital role in the ecosystems they inhabit – by clearing away carcasses they prevent the spread of diseases such as anthrax, rabies, tuberculosis and botulism, and are therefore essential for our health. They are also incredibly hygienic and are caring parents with shy characters.

Sadly, vultures throughout the world are vanishing at alarming rates and are now one of the most threatened groups of birds. Human activity has killed thousands of vultures in Africa, Asia and beyond, through persecution, electrocution, poisoning, trade in traditional medicines and habitat degradation. Africa is home to 11 species of vulture, seven of which are on the brink of extinction, categorised as either endangered or critically endangered. Just 100 pairs of Bearded vultures remain in South Africa, and Hooded vultures have declined by 62% across Africa since the 1990s. Outside West Africa’s protected areas, vulture numbers have been reduced by a massive 95% in just 30 years.

The status of the White-backed vulture was uplisted from endangered to critically endangered in 2015 due to its ongoing and significant decline. They are living in a diminishing environment, which results in a decrease in the amount of nesting habitat as well as available food. This in turn increases competition for food, which affects them because the White-backed vulture is not a species that shares food with others of its own species. Additionally, they face competition for food with other animals in their habitat. Power lines are also causing many vultures to be electrocuted.

Recent studies have been examining another reason for the decline in White-backed vultures – chemical toxicity in their organs. It has been discovered that these birds have elevated levels of lead, cadmium, copper and zinc. However, it is lead concentrated in their liver and kidneys that is causing most concern.

A new study in Botswana has found that a third of all White-backed vultures caught and tested showed elevated levels of lead in their blood. The most likely source of the lead is from their ingestion of lead bullet-contaminated flesh. Hunters’ bullets shatter inside their prey and can then be absorbed into the blood stream of the vultures when they feed on these animals or their remains.

Dr Arjun Amar, Associate Professor from the University of Cape Town’s FitzPatrick Institute of African Ornithology, who supervised the research, said: “We were all shocked by how widespread lead poisoning was for this population and just how clearly these elevated levels were associated with recreational hunting activity.”

The study, published in the international journal Science of the Total Environment, is based on tests of nearly 600 White-backed vultures. Higher lead levels were found in the blood of vultures in the hunting season and in hunting areas, suggesting that the source of the lead in their blood stream was lead bullets used for hunting.

“The only logical explanation for the patterns of lead poisoning we observed is if lead bullets were the source of this contamination,” said the study’s lead author Beckie Garbett, who conducted the research as part of her PhD.

The four-year study was conducted jointly with Raptors Botswana, a conservation NGO. It has prompted a call for a national ban on lead bullets in the hope of minimising negative impacts on vulture populations. Previous vulture studies linked declines in several species across the continent to mass poisoning, usually by farmers trying to kill other predators, or poachers deliberately trying to kill vultures for fear they might give away their location.

Researchers believe alternative non-lead ammunition, already adopted in some countries, could provide a helping hand to vultures. “Whilst lead poisoning may not be the main driver for the declines in vultures across Africa, it is something that can be tackled more easily through simple legislation, as compared to stopping the illegal actions of livestock owners or poachers,” Amar said.

Lead poisoning was one of the main reasons for the near extinction of the Californian condor (their numbers reduced to just 22 before they were taken into a captive breeding programme in 1987) and is known to increase mortality and reduce breeding performance in birds. Thus, shattered fragments of bullets left in the carcasses of big game animals on the African savannahs could also be accelerating the decline of vultures.

The latest research also suggests that the 2014 ban on hunting on government owned land in Botswana has had no effect on the lead levels in vultures. Lead levels in vultures actually increased after the ban, and the researchers believe vultures may have shifted their foraging to private game farms where hunting is still allowed: “Hunting may have become more concentrated after the ban and this might explain the increase in lead levels in vultures following the ban, since the vultures may have tapped more into this food supply. We also need to consider that because vultures range so widely, they are exposed to lead use throughout the region, therefore mitigation of this issue needs to be addressed at a regional level,” says Garbett.

The authors of the study have called for greater awareness among policy makers of the threat that lead ammunition may pose to vultures. The Convention for Migratory Species has also urged all signature countries to phase out the use of lead ammunition. Whilst Botswana is one of the few countries yet to sign the convention, the authors urge policymakers there to implement this call: “To do so is particularly important for species like vultures that range widely across international borders.”