Not only are the plants that feed them being removed for the development of plantations, but the forests are also being fragmented.

By Guest Bloggers on 27th October 2011 in World Conservation Issues 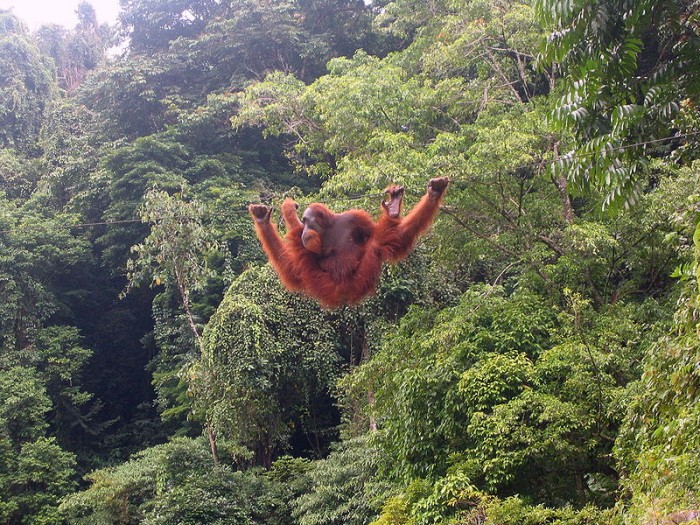 Orangutans, which are the only apes found outside Africa, inhabit the forests of Sumatra and Borneo. However, because of increased logging, poaching and plantation establishment the orangutan is in great danger of becoming extinct in the wild.

Orangutans are semi-solitary, which is unique among diurnal anthropoids. Despite several studies of the primates, the orangutan social system is not well understood. The solitary lifestyle of orangutan  is at least partly due to their diet and the distribution of their preferred foods. Because of their large body size orangutans require considerable quantities of food, and they spend 43% of their time feeding. Orangutans are frugivorous, and when the fruit is available they will eat almost exclusively fruit. They do also eat large amounts of leaves, shoots, seeds, buds, the inner bark of some trees and lianas and flowers, as well as small amounts of insects . As the orangutans’ habitat is being destroyed so is their access to their vital food sources. Not only are the plants that feed them being removed for the development of plantations, but the forests are also being fragmented.

Many primates around the world are in conflict with human populations. The majority of great apes live outside protected areas and as a result are vulnerable to habitat destruction and loss. As we all know human populations are increasing, which leads to deeper incursions into great ape habitat. Therefore, this is a problem that will only get worse in the future if not addressed.

Small and large scale agriculture, plantations and extractive industries such as logging and mining are the main cause of habitat destruction. The drive for economic growth in many developing countries has prompted large agricultural projects that can have significant negative impacts on great ape populations. It has been predicted that 90% of African ape habitat and 99% or Orangutan  habitat will be affected by moderate to high impacts from human activities by the year 2030.

In addition to habitat destruction, conflict can be caused by competition over natural resources; crop raiding is a common issue which is also closely linked to habitat destruction. Killing or wounding great apes can be the result of conflict stemming from competition, through the use of snares or traps to prevent damage to crops or property. Great apes are also killed and captured intentionally for the pet trade or bush meat.

The main threat facing orangutan populations today is habitat destruction from logging and agriculture. Primate species can adapt differently to habitat disruption: some species can adapt fast enough to survive the rapid changes and others cannot . Orangutans are currently slipping from endangered to critically endangered. It can thus be assumed that orangutans are not adapting quickly enough to the destruction their human neighbours are causing.

In my next blog entry, I will discuss in detail the plantations in Indonesia and their impact on the orangutan populations. I will also consider what we can do as consumers to persuade large international corporations to stop using products from non-sustainable plantations.

This is the first part of a 2 part series. Part 2 coming soon.