This clam has many common names including steamers, softshells, longnecks. It is a species of edible saltwater clam, a marine bivalve mollusk in the family Myidae which originates in the mud flats of America. 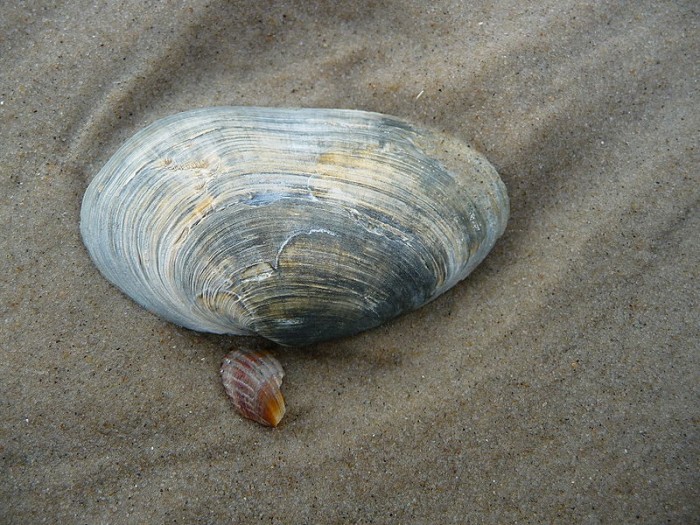 This week, M is for Mya arenaria. This clam has many common names including steamers, softshells, longnecks. It is a species of edible saltwater clam, a marine bivalve mollusk in the family Myidae which originates in the mud flats of America. However, it is invasive in some places on the Pacific Coast of North America, including Alaska, Canada and the continental USA. However, this is greatly debated (and confused) as M. arenaria originated in the Pacific Ocean during the Miocene, 5.3 million years ago.

This is a very common species around Britain and is found on all coasts due to its large dispersal during the larval phase of development. It is also found on coasts in the European North Sea from northern Scandinavia and the Faeroes to Arcachon in France. I think the most interesting point about this species is when it may have been introduced into Europe.

It is widely believed that M. arenaria was introduced into Europe in the 16th or 17th century rather deliberately as food or bait, or the larvae may have been accidentally transported by ships (as many other species in this series). However, there is evidence that shows that the Vikings actively transported this species to Europe as early as 1245, a lot earlier than the introduction previously mentioned. On top of this differing opinion of introduction, there is debate over whether this is an invasive or alien species at all. Fossils of M. arenaria have been found in Europe dating up to the end of the Pleiocene Epoch. During the Pleiocene Epoch, 1.6 million years ago, Europe went through a series of ice ages which is thought to have wiped out the local populations. This means that when the clam was introduced again (by either party) it has become re-established rather than a new alien species.

M. arenaria has a very thin calcium carbonate shell, which is easily broken, hence the name “soft-shells”, as opposed to its beach-dwelling neighbours, the thick-shelled Mercenaria mercenaria (as written about last week). This clam is found living around 15cm–26cm under the surface of the mud. It extends its paired siphons up to the surface which are used to draw in seawater. This seawater is then filtered for food and expelled. The holes in the mud through which the water is drawn in and out can often be seen at low tide and you have probably seen them yourself (just lots of holes in the mud). Water may be visibly ejected from the siphon tips when pressure is applied to the surrounding area which makes the clams easy to locate when humans are digging for them. They are  preyed upon by crabs (which dig pits to get to them), shrimps, nereids and flatfish during their juvenile stages. Adults are preyed on by crabs (as above) and various shorebirds such as oystercatchers (Haematopus ostralegus) and of course humans.

In the UK, M. arenaria is not commonly used as a food item, but in the USA they can be considered a delicacy and used in a variety of dishes. Any of these dishes can be looked up on the internet for a taster, and the clam is very easy to catch (youtube can help in this regard). However, check that the beach is not an area of conservation before hunting for the clam. Also it is recommended that before you cook the clam, you store them in salt water for a few days. This time in storage gets rid of the sand from the clams digestive tracts. It is very tasty! Bon appetite my marine loving friends and post recipes (and your opinions of the food) in the comments!