By Amy Featherstone on 11th June 2013 in A to Z of Invasive Marine Species, Invasive Species 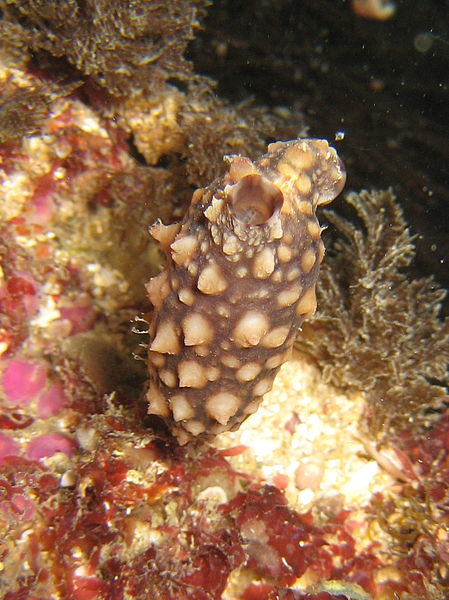 This week, S is for Styela clava otherwise known as the Stalked Sea Squirt, Clubbed Tunicate, Solitary Sea Squirt, Rough Sea Squirt, Leathery Sea Squirt and Asian Sea Squirt. Sea Squirts are tunicates, previously known as urochordates, and are members of the Tunicata, a subphylum of the phylum Chordata. They are marine filter feeders with a sac-like body structure. In their respiration and feeding they take in water through an inhalant siphon and expel the filtered water through an exhalant siphon. Most adult tunicates are sessile (unable to move) and attached to rocks or similarly suitable surfaces on the ocean floor, this is the case for S. clava.

S. clava can now be found off Australia and New Zealand, both coasts of North America, Europe and Asia. The species is originally from the north-west Pacific, from Japan to Siberia. It was probably introduced into the UK in 1952, as it was first observed in Plymouth, Devon, early 1953. S. clava spread quickly through Britain from from Plymouth in 1953 to Southampton Water in 1959 and Milford Haven in south-west Wales and across the Channel to France by 1968. From France the Sea Squirt spread through Europe and is now found in The Netherlands, and Denmark. Individuals also were first recorded in Ireland in 1972, a lot later than the UK community. As most species we came across so far in this list, it was most likely spread on the hulls of ships or transferred with oysters. It is thought that they were first introduced on the hulls of warships after the end of the Korean War in 1951.  To be more specific on the distribution S. clava Britain, it is distributed on the south and west coasts on England and Wales all the way north to Cumbria and it is found in abundance in areas of the Solent. It has also been introduced into Scotland in certain parts of Loch Ryan and other localities.

S. clava is so successful because it is a very hardy species and capable to withstanding large salinity changes and temperature fluctuations. It is thought that it would have easily spread further, except that they can only spawn in temperatures above 15°C. Another reason for its success is that it is hermaphroditic. This means that an individual has the reproductive organs of both sexes and can act as both the male and female while mating. This is not uncommon in invertebrate species such as snails and earthworms (and many marine species). This means it has the potential to breed in any situation where there is two individuals introduced.

This species is regarded as an issue to our waters as it provides serious competition for food between other species when S. clava is found in high quantities. It is also a foulding species and is regularly found on ships hulls and oyster beds (thus the theory of its distribution spread). Commercially, it is the fouling of, and the competition with, the oysters that is the issue. There has been an effort to control this species biologically by deliberately introducing Carcinus maenas into cages surrounding the sea squirt populations but this has been proved to be unsuccessful. There is some hope for the oysters though, various combinations on salinity, temperature and air exposure have been successful in killing S. clava without causing the death of the oysters.

This is a species to keep an eye out for, as there are no known beneficial effects of having it in our waters. As usual, if you spot it contact the JNCC or any other monitoring organisation with an image and the time and place you saw it.