Most people go to see puffins. The bird for people who don’t even like birds: with their clown-like technicolour beaks and comedy routines, nobody could fail to be won over.

By Chris Foster on 27th September 2011 in Bird Conservation 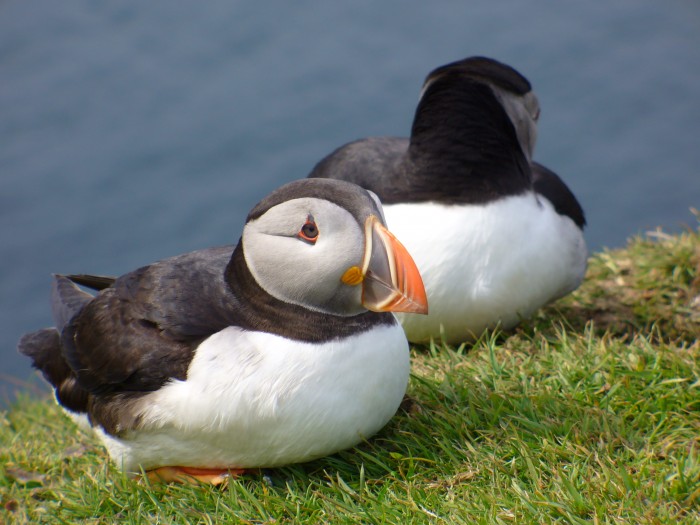 Sometimes, the stench hits you first. Rich, acrid, but for those in the know, full of anticipation. Then, a wall of sound like no other rises on the breeze, and as you peer over the cliff edge, hits you full on – a cacophony of otherworldly wails, screeches, cackles and cries. Absolutely magnificent. It’s a seabird cliff at the height of the breeding season and, to my mind, the most incredible natural spectacle in Britain. Nothing quite matches the sights, sounds and smells of thousands of kittiwakes, guillemots, razorbills, shags and gannets crammed on to a rock-face – a vertical seabird city, entirely controlled by avian.

Of course, most people go to see puffins. The bird for people who don’t even like birds: with their clown-like technicolour beaks and comedy routines, nobody could fail to be won over. Eschewing the ledges, they dig burrows in soft grass and mud at the cliff top, or inhabit vacant rabbit runs. They’re house proud, too – early in the breeding season you’ll often see puffins in a burrow entrance sporting a muddy beak and plumage, and what I like to imagine is a smug smile. As well as being cute enough to melt the hardest of hearts, puffins are incredibly confiding, curious even. They’ll probably wander over to see what you’re up to; I’ve even read reports of them having an exploratory nibble of somebody’s shoelaces. Great photos result – I took the ones accompanying this article with an everyday point and shoot digital camera.

Not only do the cliffs provide a wildlife spectacle and encounters to be remembered, but the scenery can be world beating too. I have fond memories of visits to the Treshnish Isles, off the Isle of Mull, where blue skies and the distant green mountains of Rum and Skye reflected off the sea, and to Hermaness, Shetland, at the very northern end of the most northerly island in Britain – head due north from there, and you’ll hit nothing but sea and ice on your way to the North Pole. It’s quite a backdrop, and I highly recommend you go. If it were spring or early summer I’d even say drop everything and go at once, but perhaps wait until the birds return from their winter odysseys far out in the Atlantic. Even if you don’t fancy a journey that epic, Skomer in Pembrokeshire, offers some of the best puffin watching anywhere, and you can even see them nesting on the Yorkshire coast at RSPB Bempton Cliffs. So next summer, no excuses – head to the cliffs, relax with the puffins, and let yourself be overwhelmed by abundant, thrilling, vibrant life.