Deer are never far from the press in recent times; debated tirelessly and inspiring fierce devotion from people both sides of the cull or not to cull divide. Some seek to control deer, to cull them in aid of economic or environmental gains; others to preserve them for sport or out of sheer goodwill. 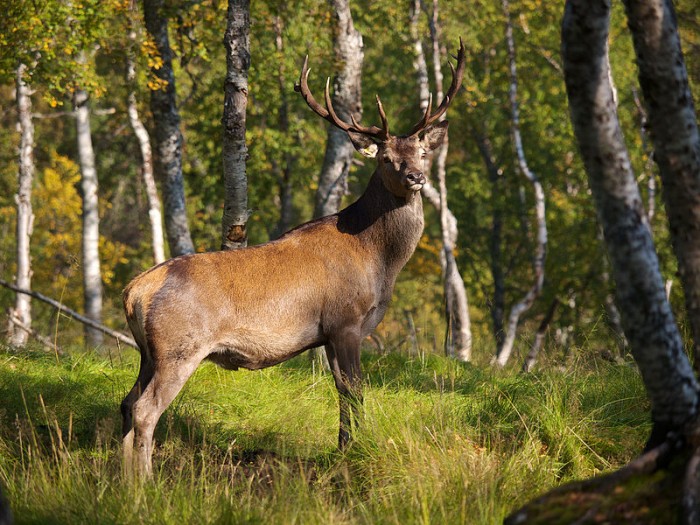 Deer are never far from the press in recent times; debated tirelessly and inspiring fierce devotion from people both sides of the cull or not to cull divide. Some seek to control deer, to cull them in aid of economic or environmental gains; others to preserve them for sport or out of sheer goodwill. Whichever side of the fence you find yourself rooted, the big deer debate is an intriguing one. Deer are charismatic and charming, a firm favourite among many nature lovers, likewise they are prized for sport, contributing millions to rural economics. Deer are also widely condemned however, overpopulation resulting in damage to crops, forestry and the very ecosystem which they inhabit. All of this has lead to Bambi becoming somewhat of a hot topic of late and I, for one, as both a deer lover and a realistic conservationist find myself intrigued by the whole thing.

Before delving into the nitty gritty regarding these apparently problematic ungulates it is first necessary to take a look at the population trends of deer in the UK. Of our six deer species only two  are in fact native to the British Isles; the Roe Deer and much larger Red Deer. These two species are by far the most numerous in the UK with government estimates placing the population of Roe Deer at around 800,000 individuals and Red Deer at 350,000. On top of these, Britain is also home to four non-native deer species. Among them, the Fallow Deer, introduced in the 11th century, is by far the most numerous with a population of around 150 – 200,000 individuals. Of our more recent arrivals, Muntjac are increasing in number annually with upwards of 150,000 now thought to inhabit Southern England though with sightings as far North as Scotland it is clear that the population of these small deer is growing rapidly. Next we have the Sika, a close relative of our native Red Deer and one that is seemingly loathed by foresters. Sika are now thought to number somewhere in the region of 35,000 individuals, substantially more than our final deer species, the Chinese Water Deer numbering it at 10,000 individuals. As you can see, Britain harbours a lot of deer, playing host to far more than would normally exist within a healthy ecosystem.

Government agencies, NGOs and academics all agree that deer are more abundant now than at any time throughout the last 1000 years. Indeed, populations continue to grow annually despite an estimated 350,000 deer culled in the UK each year. Aside from the introduction of non-native species such as Muntjac and Sika, there are a number of possible explanations for this rapid increase in deer numbers; among them a lack of natural predators such as Lynx – species that would have helped regulate deer populations had they not been extirpated by man. Elsewhere increasing woodland cover is thought to have bolstered numbers, as is an increase in the planting of winter crops. Warmer winters may also play a part, reducing the level of natural mortality that would take place each year while greater connectivity throughout urban areas has also been stated as aiding the increase. Whatever the reason, it is clear that deer in the UK are massively overpopulated, doubtlessly due to the actions of man. Despite disease, culling, vehicle collisions and bouts of severe weather, deer numbers continue to rise annually, a fact that when coupled with a clear range expansion of many species leads to inevitable consequences.

Like them or loathe them, it is hard to deny the huge impact deer are having on the British ecosystem. Firstly referring to the environmental implications of deer overpopulation and overgrazing is often stated as the main impact of unnatural deer densities. Red and Roe deer are a natural part of the British ecosystem, with Fallow also accepted as native by some. Despite this, these species, alongside other non-natives are regarded by Natural England, Scottish Natural Heritage and a myriad of other sources as having a profound negative impact on National Nature Reserves and SSSI’s across Britain. Indeed, this goes without mentioning their impact on unprotected areas. Many habitat types, from blanket bog and ancient woodland to upland heath all feel the effects of overgrazing though it is our woodlands that bare the brunt of the onslaught through the following means:

As well as impacting upon the environment, overpopulated deer also have the potential to cause great damage to human interests. Deer of all species have a profound effect on forestry operations through bark stripping, browsing saplings and reducing regeneration with the Forestry Commission of Scotland alone amounting deer damage to £4.5 million per year. Similarly, deer also have an effect on agriculture in the UK each year through tramping, browsing and damaging to fencing – thought these impacts are often fairly localized. Add to this  damage to vehicles attributed to traffic collisions with deer and many people believe it is time to bring deer populations down to a more natural level.

While discussing mans association with deer it would be rather ignorant of me not to touch on the benefits of a flourishing deer population with the below extract from a 2009 parliamentary post note emphasizing the importance of deer to many people in the UK:

“Wild deer are a natural economic and social resource. They and their management contributes directly and indirectly to the economy through professional and recreational stalking, the supply of products such as rifles and fencing, the venison trade, and benefits to tourism. The importance of deer as a resource varies across the UK. In Scotland, sustaining wild deer for sport is a primary management objective across much of the Highlands, and is estimated to contribute over £170 million to the economy. Deer management provides the equivalent of over 2,500 full-time jobs in Scotland, which are an important component of rural employment. In England, Wales and Northern Ireland, deer are rarely a primary management objective“

Though some would favour the rewilding approach to deer control – reintroducing large predators to restore nature balance. Such sentiments, though noble (I am in fact a huge fan of rewilding) are not yet plausible however, if they are ever implemented at all. Even if they went ahead, you would need a huge number of predators to even begin to tackle Britain’s deer population (many of which live in areas predators could not). Likewise, measures such as deer fencing only serve to shift the problem elsewhere leaving only one alternative. Lethal control.

As stated earlier, approximately 350,000 deer are culled in the UK each year but with population continuing to skyrocket many, myself included, question whether or not this is enough. In Scotland, SNH has the power to suggest and, if the need be, enforce the control of deer in problem areas. Also publishing a ‘national strategy for wild deer management’ and often working in conjunction with conservation bodies to control deer in the areas that need it most. In England and Wales however things are far less organized and it often falls to the landowner to control problem deer or his or her land. in 1998 the Deer Initiative was set up to improve deer management in England and Wales aiming to promote cooperation between interested parties and landowners – Something that is often very hard to achieve and can hinder progress. This scheme has been commended by numerous sources and may, in time, help better the situation in the two countries. We shall see.

Though it is clear that culling is necessary to combat the damage caused by deer, the number of animals requiring control remains obscure. Research from the University of East Anglia suggests culling 50-60% of Britain’s 1.5 million deer in order to protect the countryside. Others suggest targets of 20 and 30% while some, including the Deer Initiative state that targets much be reviewed and shifted annually. DI do however claim that “But its says that one off, heavy culls, followed by little or no culling, never achieve a sustained drop in numbers. Reduction culls need to be substantial and usually need to run over a number of years to be effective“. Whatever your opinion on the matter, it is clear that whatever scenario unfolds, a large number of deer will need to be controlled. Of course, in a humane and dignified manner and hopefully in such a way that benefits local people. i.e the venison trade.

As ever, controversy often comes hand in hand with the word ‘cull’. Many people it seems object to the control of deer, some for reasons I fully understand and others for reasons that baffle me entirely. With deer crucial to sporting interests, mainly in Scotland, it is understandable that those seeking to gain from abundant deer would dispute a large scale culling program. This issue is easily solved however and in my opinion it is wholly possible to strike a balance between sporting interests and conservation. Even with a 50% cull of deer there will still be enough, to sustain the current level of shooting that goes on. Many of the people closely involved with deer stalking would also prove an asset to conservation; their knowledge and field experience of pivotal importance when it comes to implicating widespread control measures. No, this aspect of the debate does not bother me half as much as the alternative argument.

Many it seems dispute control of deer simply because it involves the death of animals; because it does not fit with the notion of animal rights and actively involves the death of something all together cute and fluffy. While the decision to cull any species should never be taken lightly I do however disagree with this notion. Like the vast majority of nature lovers, I adore deer. To me, the sight of a Roe Deer’s rump bouncing off into the undergrowth is one of the most enjoyable sights in nature. Likewise, roaring Red Deer never failed to impress. Still, with this in mind, I cannot dispute deer control based on emotion alone. Given the negative impact deer are having on the British ecosystem culling, though somewhat disheartening, is the only way in which we are able to restore balance. As I have stated before, conservation is not always pleasant. Conservation, more often than not involves the death of animals, if only to balance out centuries of damage wrought upon the environment by ourselves. With this in mind, I fully support any effort to implicate a widespread culling scheme across the British Isles and personally agree with the DI’s stance on the matter. Deer will forever be an enjoyable fixture of our country  but at present they are wreaking havoc with our nation’s ecology and as such it is clear that something must be done. Whether or not such a scheme will go ahead in the face of such fervent opposition however is another story entirely. Only time will tell.