Q is for Quail

The British population is small, and rather ephemeral. Quail being our only migrant gamebird, numbers fluctuate hugely from year to year and depend strongly on conditions further south.

By Chris Foster on 3rd September 2012 in A to Z of British Birds, Bird Conservation 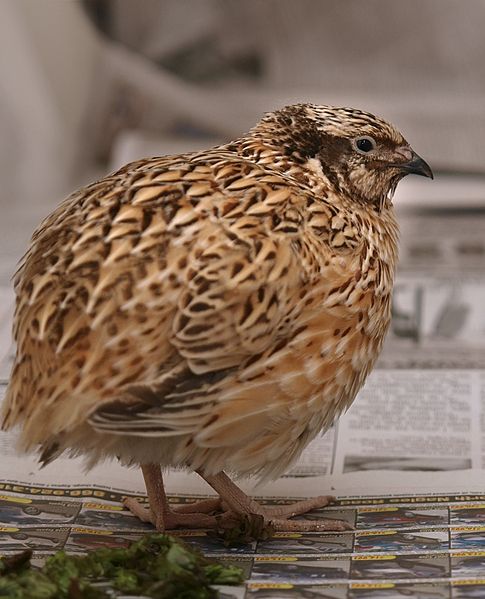 A quick search for scientific papers about the common quail, Coturnix coturnix, mostly brings up studies of the Japanese race (now considered a separate species), commonly used as a lab-test organism. I found myself wading through paper titles concerning obscure corners of avian biology and toxicology which I don’t pretend to understand at all.  I don’t know for sure if it is the case that few scientists are studying wild quails in Europe, but it would be a great shame. I’ve enjoyed the very few occasions I’ve heard their ‘Kwik, kwik-kwik’ call – sometimes described as ‘Wet-my-lips’ – in the Hampshire countryside. It’s an atmospheric sound redolent of high summer, and the birds themselves are handsomely striped, though incredibly difficult to see. Quails are, I suspect, quite literally overlooked in Britain, outside of the laboratory.

The global common quail population is large – tens or possibly even hundreds of millions strong, with a range stretching across most of Europe and far into Asia, so I suppose there isn’t much of a quail conservation crisis driving a need for such research. But the British population is small, and rather ephemeral. Quail being our only migrant gamebird, numbers fluctuate hugely from year to year and depend strongly on conditions further south. It is only recently that they’ve begun to recover from a historic population decline, and I do wonder if climate change will increase the incidence of warm, settled weather patterns which might encourage more quails north into Britain, even if such conditions have been lamentably infrequent this year.

A little light was shed on this question when Henry Edmunds (of the Cholderton Estate on the Hants/Wilts border) shared an interesting story in ‘Kingfisher’, magazine of the Hampshire Ornithological Society. Last year his son encountered between four and six family groups, or ‘coveys’ of quail, whilst turning straw on a neighbour’s farm in early September. He surmised that the field may have been attractive to them as it contained very good shelter, with high stubble and a lot of volunteer oilseed rape; but that they may have bred in a nearby patch of rough grassland. Perhaps the most interesting point was the time of year. The young birds he observed were tiny, and must have been born no earlier than August – and were therefore likely to be the product of adults which had arrived late in June. Quails have a very short life cycle (part of their attraction as a lab organism, I presume), which raises the fascinating possibility that these adult birds may themselves have been born that spring, in France and Spain, before moving north much like a migrant butterfly.

After encountering the birds they decided to stop work in the field to allow the chicks to grow safely, and also nursed one with an injured wing back to health. As it happens Henry is one of the finalists in the RSPB’s 2012 ‘Nature of Farming’ award – and I’m sure he’d be grateful for your vote.