N is for Neuroptera

Aside from them being quite nice to look at, there’s a good reason for gardeners to encourage lacewings to share their home for the winter, or even better, to provide a purpose built lacewing home. 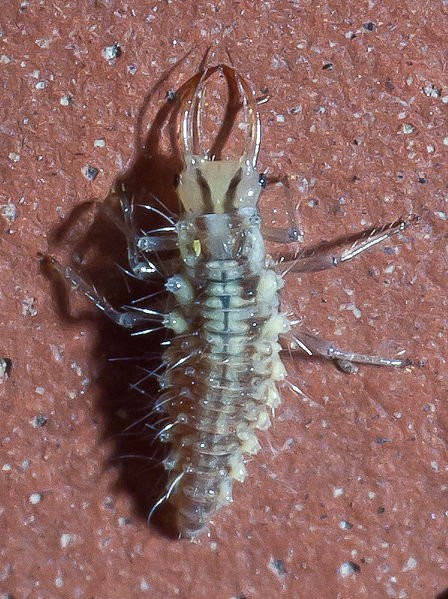 Neuroptera is a ‘small’ insect family, comprising around 6000 species worldwide. Those that occur in the UK are predominately lacewings, although we do have one species of ant-lion living in just one or two locations in East Anglia. There are 43 British lacewings, often divided into two groups of morphologically similar species: ‘green’ lacewings and ‘brown’ lacewings, named for reasons which become obvious when you see one.

But what exactly is a lacewing?

The adults are slender, fragile looking insects, sporting two pairs of transparent, intricately veined wings with the appearance of very fine lacework fabric, hence their name. On top of a small, beady-eyed head, long antennae wave ponderously back and forth as though tasting the air very carefully. They’re similarly slow moving in flight, which is evidently why lacewings are rarely seen flying in the open by daylight – it would be too tempting and easy a snack for a passing bird to resist.

They overwinter in the adult stage, and will often hibernate inside buildings. One passed the colder months on the wall of our house a couple of years back, doing not much more or less than lacewings I’ve seen in the summer: only the occasional half inch movement up the wall or languid, slow motion wave of an antenna gave any hint the creature was still alive. 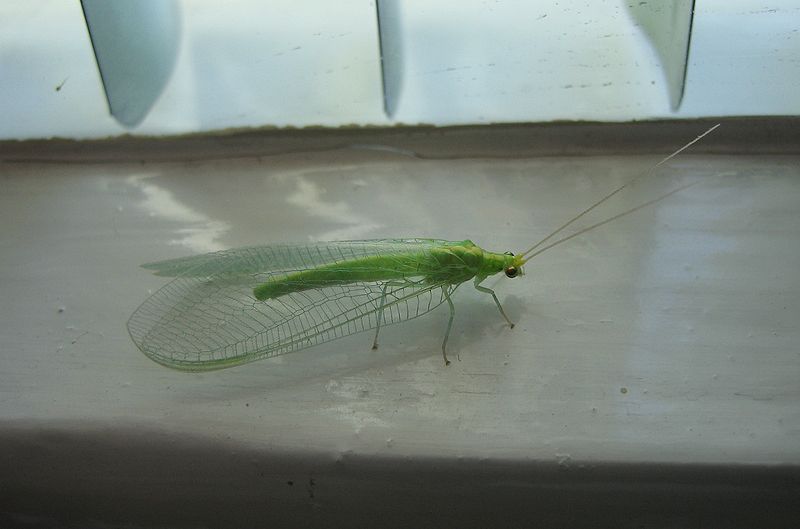 Aside from them being quite nice to look at, there’s a good reason for gardeners to encourage lacewings to share their home for the winter, or even better, to provide a purpose built lacewing home. For whilst they are arguably less famous for this reason than ladybirds, lacewings, especially in their larval stage, possess a voracious appetite for aphids. Unlike the adults, the larvae are fierce looking creatures, with a huge pair of inward curving jaws at least as long again as the rest of their head.

Where it gets really interesting is what happens when lacewings wake again in the spring, and look toward the next generation. Take, for example, lacewing courtship. Here is an excerpt from the Royal Entomological Society’s website:

“Lacewings court by ‘tremulation’, a low frequency sound produced by vibrating their abdomens, which in turn causes the substrate they are standing on to vibrate. The males and females will take turns tremulating; this duet is an essential prerequisite for mating.”

This fascinating example of wild sound, one of very few I can think of in which an animal takes advantage of the natural resonance of the ground on which it stands, is surely ripe for the natural history documentary treatment, if it hasn’t already been filmed.

Their egg laying technique is also pretty interesting. Each egg is laid on its own strand of mucus, which hardens in the air such that the egg ends up perched on a stalk, hovering above the leaf on which it was laid. To what advantage, I can’t say, but there’s clearly more to these seemingly wispy, inconsequential insects than meets the eye.