G is for Gadwall & Garganey

One of the top five sites for gadwall in the UK is the Thames Estuary – another reason, if any were needed, why dropping a whopping great airport into the middle of it would be a seriously bad idea.

By Chris Foster on 16th April 2012 in A to Z of British Birds, Bird Conservation 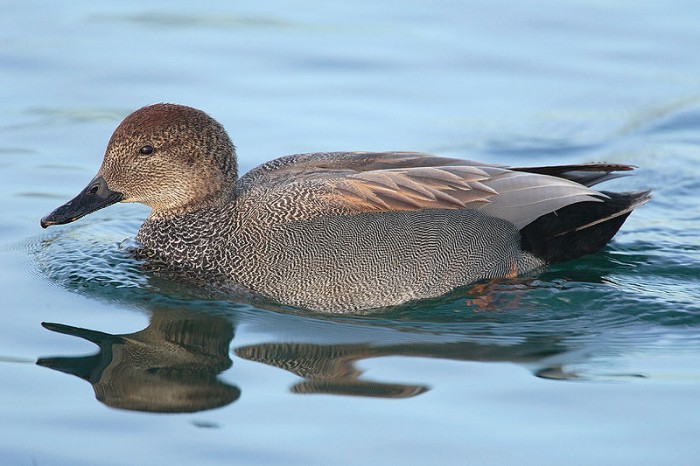 If there was an award for most overlooked or underrated bird in Britain it might go to the gadwall.

It’s a dabbling duck of the Anas genus, like the familiar mallard but slightly smaller, the male decked out in tasteful shades of grey and brown, with a prominent black ‘stern’ (his rear end, in other words) and white ‘speculum’ (a square flash on the trailing edge of the wing). The overall effect is beautiful, to my mind, and all the more so for its subtlety. Females are much more like mallards, but easy to tell apart with reference to a good field guide. Picking gadwalls out from amongst the mallards at your local lake or gravel pit is good sport – and getting easier with every passing year. Up to 25,000 overwinter in Britain, and 1600 breed – yet they’re listed as an ‘amber’ species of conservation concern. Why? Well, it’s another reminder that nature doesn’t respect international borders.  If a species is doing well locally, it may still be worth investing in if the wider situation is different. Or in the gadwall’s case, if internationally important numbers are found here. One of the top five sites for gadwall in the UK is the Thames Estuary – another reason, if any were needed, why dropping a whopping great airport into the middle of it would be a seriously bad idea.

At the other end of the rarity scale, another Anas species, the garganey, has been arriving in the country over the last few weeks. It’s notable for being the only duck to visit Britain for the summer, and easiest to find whilst passing through on migration – so get out there and find a spring male garganey now! I say male, because with apologies to the female of the species it’s the drake you want to see: a fantastically marked bird with a rich purple-brown head strikingly adorned with a blazing white eye stripe. There’s no time to lose as, moving into the summer, seeing one will become progressively harder as garganeys go to ground – or rather to marsh – breeding secretively amongst reedbeds and wet meadows. And since they number just 80-100 pairs, there aren’t many to look for. Not to mention that two of the best sites, Stodmarsh and Dungeness, both in Kent, have at one time or another been threatened by  airport proposals. An unfortunate pattern seems to be emerging.

I took most of the facts and figures above from ‘Waterbirds in the UK 2009/10’, produced from the Wetland Bird Survey.  It’s another BTO voluntary effort you could become a part of; try contacting your local organiser to see if any local wetlands are not currently covered. It’s great fun, and rewarding too: the perfect way to make counting ducks count. After all, the more duck data conservationists are armed with, the more we’ll be able to combat any future ill thought through developments of the sort hanging over the Thames.