Dreissena polymorpha superficially resemble marine mussels in the family Mytilidae, and like them, are attached to solid substrates with a byssus. 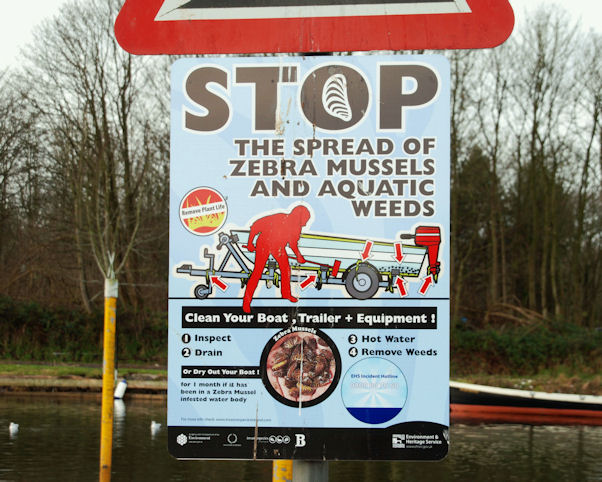 This week, Z is for the zebra mussel which has the scientific name Dreissena polymorpha. I can hear you shouting at your screen saying that this is not a marine species and you’d be right, it is predominantly a fresh water species, but it has been found in brackish estuarine environments. This species was originally native to the lakes of southern Russia being first described in 1769 in the Ural, Volga and Dnieper rivers. However, it has been accidentally introduced in many other areas, and has become an invasive species in many different countries worldwide.

Dreissena polymorpha superficially resemble marine mussels in the family Mytilidae, and like them, are attached to solid substrates with a byssus. However, zebra mussels are not at all closely related to the mytilids; they are much more closely related to the Veneridae, the Venus clams which in my opinion is shown by the ‘D’ shape of their shell (although the shell shape is variable). They are usually about the size of a fingernail, but can grow to a maximum length of nearly 2 inches. Zebra mussels get their name from a shell which is ornamented with blue or brown and yellow-white alternating zig-zag or wavy bands (giving them their common name) which is commonly seen on their shells, though not all shells bear this pattern.

The life span of a zebra mussel is four to five years. A female zebra mussel begins to reproduce within 6–7 weeks of settling where she can produce 1,000 eggs each reproductive cycle and upwards of 1 million each year. Free-swimming microscopic larvae will drift in the water for several weeks and then settle onto any hard surface they can find. Zebra mussels also can tolerate a wide range of environmental conditions and adults can even survive out of water for about 7 days so people must be careful when disposing this species.

Zebra mussels do no leave any field signs except their dead shells which are identified in the same way as live shells. These shells may be covering hard objects but can also be found attached to most substrates including sand, silt, and harder substrates. Other mussel species frequently represent the most stable objects in silty substrates, and zebra mussels attach to, and often kill these mussels. Such as in Ireland where zebra mussels have eliminated the two freshwater mussels from several waterways, including some lakes along the River Shannon in 1997. Dead shells can be found on the bed of water bodies or washed up on the margins, sometimes as single shells but occasionally, as in life, with two shells joined. Even when dead, the shells retain their stripy appearance. The zebra mussel has a short-lived, free-living larval stage but it cannot easily be detected in the water and so only adult mussels can be used for identification.

The native distribution of the species is in the Black Sea and Caspian Sea. Zebra mussels have become an invasive species in North America, Great Britain, Ireland, Italy, Spain, and Sweden. They disrupt the ecosystems by killing off local mussels, and damaging harbors and waterways, ships and boats, as well as water treatment and power plants. Water treatment plants are most affected because the water intakes bring the microscopic free-swimming larvae directly into the facilities allowing them to settle inside the pipes themselves. The intake pipe will also bring in plenty of food for the zebra mussels settling there, making it a suitable place for them to survive.

Dreissena polymorpha are filter-feeding organisms. They remove particles from the water column by pumping the water through their valves and extracting particles of a certain size. To put this into context, the mussels can process up to one gallon of water per day, per mussel. Since the zebra mussel has become established in Lake Erie, USA, water clarity has increased from 6 inches to up to three feet in some areas which may seem like a good process, however this improved water clarity allows sunlight to penetrated deeper where bacteria can now grow. This bacteria when decaying, can wash up on shorelines fouling beaches and causing water quality problems. This process is called eutrophication.

Lake floor food supplies are enriched by zebra mussels as they filter pollution out of the water. This biomass becomes available to bottom feeding species and to the fish that feed on them. The catch of yellow perch increased 5 fold after the introduction of zebra mussels into Lake St. Clair, USA.

In places other than the USA, Dreissena polymorpha was first reported in Hungary in 1794. We are lucky here as the rapid colonisation of Britain has been described from the first observation in Cambridgeshire in the 1820s, then London in 1824, and it finally colonised Scotland through the Union Canal near Edinburgh in 1834. In 1827 zebra mussels were seen in the Netherlands at Rotterdam. Canals that artificially link many European waterways facilitated their early dispersal. It is non-indigenous in the Czech Republic in Elbe river in Bohemia since 1893; in southern Moravia is probably native. Around 1920 the mussels reached Lake Mälaren in Sweden. The first Italian appearance of the organism was in northern Italy in Lake Garda in 1973; in central Italy they appeared in Tuscany in 2003 showing that it is still spreading.

To bring it close to home again, many British water companies are reporting having problems with their water treatment plants with the mussels attaching themselves to pipeworks. Anglian Water has estimated that it costs £500,000 to remove the mussels from their treatment plants. It has been argued that zebra mussels also have had an effect on fish populations, with dwindling fish populations in areas such as Salford Quay, Manchester.

This species is regarded as detrimental and there have been attempts to rid it from our waters. If you are studying this species, or collecting it for other reasons, the consensus is that it should be killed before disposal. Due to the long life of this species outside of the water, it is easy for this species to occupy new locations.