Eagle Owls in the UK – Native or Not?

The Eagle Owl is never far from the headlines in recent times; welcomed by many, persecuted by some and virulently condemned by others – largely due to their tendency to predate raptor species, including those of conservation concern

By James Common on 24th April 2016 in Bird Conservation, Ecology 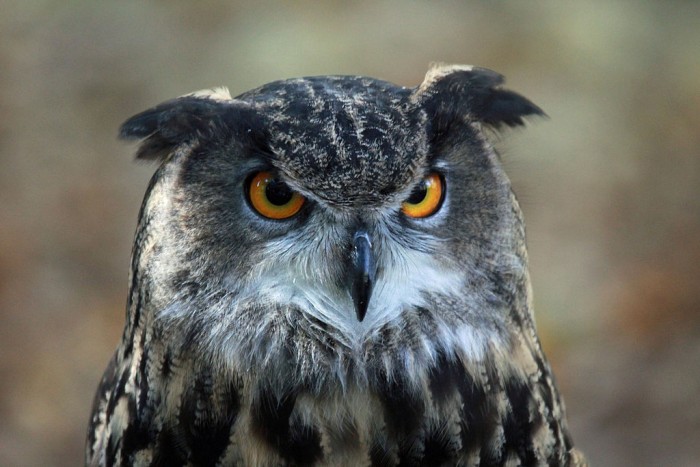 It is common knowledge that Britain now holds a growing population of Eurasian Eagle Owls (Bubo bubo) though the origin of these pioneering predators is subject to sometimes heated debate. The Eagle Owl, one of the world’s largest and most awe inspiring owl species is never far from the headlines in recent times; welcomed by many, persecuted by some and virulently condemned by others – largely due to their tendency to predate raptor species, including those of conservation concern. Something brought home in 2010 when an Eagle Owl was filmed attacking a nesting female Hen Harrier in Bowland, Lancashire. For this reason, many conservationists go as far as to suggest that the species has no place among our islands fauna. Likening the species to other problematic invasive species such as mink and signal crayfish. Others believe that B.bubo does in fact occur naturally in the UK; pushing for the full protection of the species and its addition to the official ‘British list’ of breeding birds.

Recently the Eagle Owl was cast into the spotlight once again, notable sportsman Sir Ian Botham using the species as the basis for a scathing attack on the RSPB. In his article, published in the Daily Mail and found here, Botham accuses the RSPB of wanting to “nip the ongoing colonisation of Eagle Owls in the bud” and goes as far as to accuse conservationists of deliberately disturbing nesting owls. These accusations have been dismissed by the RSPB, who stress that at present, no action is being taken against the species. Instead the RSPB highlight the need to monitor the ongoing spread of B.bubo with regards to the potential implications associated with the presence of the species in Britain – not ruling out future action should problems emerge. All of this, whether based in fact or fiction has once again hurled Bubo bubo into the limelight. Many, it seems, are unable to decide whether the species is in fact a natural figment of the British landscape, an acceptable non-native on par with the much smaller Little Owl or indeed, a damaging invasive species worthy of control measures.

it is the opinion of some, that the Eagle Owls currently dwelling in the UK are decedent entirely from domestic stock (RSPB, 2016). The species has been kept commonly in captivity since the 17th century and remains a popular choice of pet for many, including non-falconers, due to the fact no formal license is required to own one. When selling an Eagle Owl, a certificate is however required; such certificates can be used to give an insight into how many owls are kept in the UK. In the ten years leading up to 2007, over three thousand such certificates were issued though this only represents birds sold to new owners and it is estimated that many more are kept nationwide (RSPB, 2016). With so many owls kept as pets, it is inevitable that some will find their way into the wild – whether through deliberate releases or accidental escapes. Indeed, the RSPB estimate that as many as 65 owls could escape into the wild each year. Many of these likely to survive due to the owls broad diet and adaptation to our climate. Both the RSPB and British Ornithologists Union (BOU) hold the opinion that the Eagle Owl residing in Britain at present are non-native.

Whereas many of Britain’s Eagle Owls almost certainly stem from domestic escapes, there are those who argue that the species has occurred naturally in the UK – contrary to the claims of the RSPB and British ornithologists Union (BOU). Among these, the World Owl Trust have proven vocal on the matter. Citing records from Orkney (1830), Shetland (1863, 1871) and Argyll (1883) and highlighting the continued expansion of the species in mainland Europe, the trust suggest that there is no reason that at

least some of the Eagle Owls currently inhabiting Britain could have occurred naturally. The World Owl Trust also highlight a wealth of data that appears to suggest wild Eagle Owls have existed (and still exist) in the UK. Among this; perhaps the most persuasive argument put forth is the presence of B.bubo in the fossil record – something which suggests that the Eagle Owl did indeed inhabit the UK before eventually succumbing to extinction. In a 2007 study published in British Birds, John Stewart concluded, following a review of the archaeological records, that “Eagle Owls form a natural part of Britain’s fauna”. This paper is freely available online.

The World Owl Trust also put forth other evidence to suggest that B.bubo is in fact native to the British Isles, the following appearing to lend credence to this theory:

* The occurrence of three birds in Donegal, Ireland following a a sevre northeasterly weather front.

* The account of R, Bowdler Sharpe of the Zoological Department of the British Museum, suggesting that wild birds have been previously shot on Orkney and Shetland – where the likelihood of escapes occurring is severely diminished.

* The recording of this species as a “rare vagrant” by numerous sources including Bernard Tucker, author of ‘the handbook of British Birds’, as well as T.A Coward and Charles St. John.

* The conclusion of the authors of the renowned Collin’s Bird Guide that “a handful of genuine records have occurred in Britain, all in the 19th Century”

All in all, the World Owl Trust provide a veritable smorgasbord of information suggesting that the Eagle Owl is in fact a native British species, all of which can be found here:

The debate surrounding the Eagle Owl in Britain is a very interesting one. Personally I find myself agreeing with the stance of John Stewart and those at the World Owl Trust – I believe that Eagle Owls have and indeed, still do occur wild in Britain. Until a ringed bird is recovered however or a bird is actually caught in the act of migrating, the debate will rage on. The RSPB and other parties are right to monitor the situation, though I, like many other birders, welcome the addition of the Eagle Owl to the British List and look forward to, some day, viewing these imposing predators wild in the UK. Something which may never happen if action is taken to halt the further spread of the species, though only time will tell if such action is ever deemed necessary.