Home › Articles & Blogs › I is for Ichneumon

I is for Ichneumon

It is amongst the most diverse of all insect families, numbering around 60,000 species worldwide, of which about 3,000 occur in the UK. 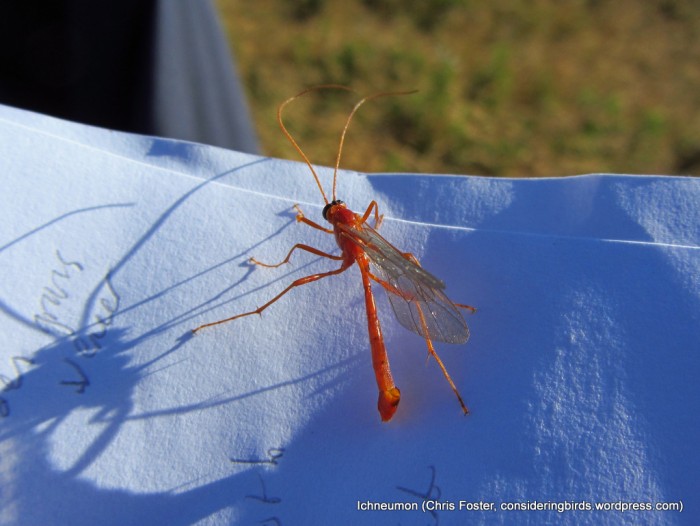 The wasp, she lays an egg, ‘neath the caterpillar’s skin.

It hatches, and the larva grows, feasting from within.

It kills its host then off it goes.

To sting another one.

These lines from one of my favourite songs offer a fairly succinct introduction to the life cycle of a parasitic wasp. But you don’t need a degree in evolutionary biology (as has the songwriter) to appreciate the brutal efficiency of parasitism as a strategy; indeed, it has proved so successful that parasites have independently evolved in a surprisingly large number of insect families. But it is parasitic wasps that possess the greatest notoriety, and of these Ichneumoidae is perhaps the most famous family.

It is amongst the most diverse of all insect families, numbering around 60,000 species worldwide, of which about 3,000 occur in the UK. So there’s little point in attempting a general survey of British ichneumons, unless I were to dedicate the next few months to the project. Instead I want to take a bit of a sideways leap. Consider the next line of Erelli’s song:

Seems to me there’s too much misery to believe in Kingdom Come.

As the title “Kingdom Come” suggests, it is not so much a song of biology as one about the religious views of Charles Darwin, written as part of the Shrewsbury Folk Festival’s Darwin Song Project in 2009.* The lyrics are adapted from a notorious letter written by Darwin on 22nd May 1860, to his friend Asa Gray, the Harvard biologist:

There seems to me too much misery in the world. I cannot persuade myself that a beneficent & omnipotent God would have designedly created the Ichneumonidæ with the express intention of their feeding within the living bodies of caterpillars, or that a cat should play with mice. Not believing this, I see no necessity in the belief that the eye was expressly designed.

Whether or not you share Darwin’s views about the philosophical implications of evolution by natural selection, the very fact that such a legend of science was moved to think deeply by his observations of nature is significant. The typical riposte to the idea of ‘misery’ being rife in nature is that creatures such as the ichneumon are driven entirely by instincts: to survive and to reproduce. And, furthermore, that we humans are no different, that the entirety of our culture – art, religion, war, society, tradition – are mere products of our evolved nature.

That may well be true on a factual level, but it has never quite satisfied me. Even if they are purely instinctual in origin, our desires, emotions and feelings are real enough, and to deny that we’re as driven by these as we are by pure reason or some higher search for truth is to cut ourselves off from the greater part of the human experience. So when I look at an ichneumon I think of Charles Darwin, who himself grappled with faith and doubt, love and hate, joy and misery, wonder and disappointment, and I’m reminded that none of us are automata. Not even scientists. And maybe, just maybe, not even wasps.

*Shrewsbury being his birthplace and 2009 being the 200th anniversary of that happy event.