Biotelemetry has provided a unique glimpse into the ecology and habitat use of the ‘near threatened’ whitespotted eagle ray in Florida. It has revealed that this species shows an affinity for habitats that are also valued by humans for recreation and commercial purposes, which will therefore have implications for its conservation. 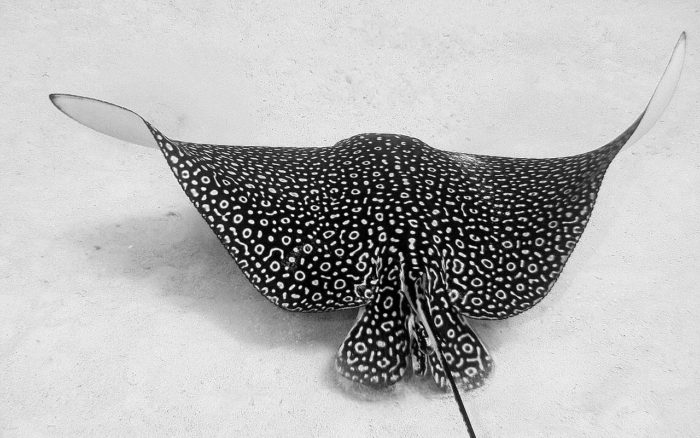 The whitespotted eagle ray, found in estuaries and lagoons throughout Florida, is listed as “near threatened” on the International Union for Conservation of Nature’s “Red List of Threatened Species.” Keeping tabs on this highly mobile species for conservation efforts can be extremely challenging, especially for extended periods of time.

Researchers from Florida Atlantic University’s Harbor Branch Oceanographic Institute used uniquely coded transmitters and acoustic telemetry to give them a leading edge to unravel fine-scale movement, behaviour, and habitat use of whitespotted eagle rays in Florida’s Indian River Lagoon. Biotelemetry provided the researchers with unique insights into this species’ occupancy, which is not apparent at the landscape-scale.

Despite being a state-protected species in Florida for more than two decades, this study is the first to characterise the ecology and fine-scale habitat use of whitespotted rays in Florida while also identifying areas of potential interactions between this species and multiple environmental threats. For the study, researchers followed seven mature individuals (six males and one female) and individually tracked them for a total of 119.6 hours. They used a tracking vessel to continuously and manually track the rays between June 2017 and August 2018.

Results of the study, published in the journal Endangered Species Research, show that rays use the deeper portions of the Indian River Lagoon, along Florida’s southeast coast, during the day and shallower portions during the night. In addition, they move faster while in the ocean and lagoonal habitats and slower in channels and inlets. This suggests that whitespotted eagle rays may spend more time foraging at night in the shallow water of the lagoon than during the daytime. These prolonged observations revealed affinities for habitats of considerable recreational and commercial importance, such as inlets, channels, and clam aquaculture lease sites close to shore.

Lead author Breanna DeGroot says: “Understanding channel use is crucial to evaluating risks and potentially developing strategies to mitigate negative impacts to the whitespotted eagle ray, as both channel and inlet habitats have high levels of human activity such as boating and fishing and are prone to coastal development impacts from dredging. In addition, these high traffic areas experience increased noise and chemical pollution.”

Rays also spent a larger proportion of time in the channels and inlet during the lighter and warmer portions of the day and used shallower depths during the cooler and darker portions of the day. Rate of movement significantly increased with temperature, suggesting that rays are more active during warmer periods. While previous studies have found that whitespotted eagle rays are influenced by tidal cycles, this study did not find any tidal patterns in ray habitat use or distribution.

Because more clammers work on lease sites during the day, interactions between the rays and growout sites may therefore be underestimated. Findings from this study will help to inform statewide conservation plans for the species and provide critical information to hard clam aquaculture farmers and restoration managers for the successful production of bivalves in the area.

“As coastal populations and development increase, there is more potential for whitespotted eagle rays to interact with human activities. In addition, intense coastal development such as dredging, construction, and pollution have been linked to habitat alteration, which may change the abundance and distribution of this species as has been documented with shark species in degraded habitats,” said so-author Matt Ajemian

As whitespotted eagle rays already display an affinity for these modified habitats, increased interactions with humans and added pollution and/or disturbances could result in changes to the species’ movement patterns and health. Ultimately, such human-induced habitat alterations could reduce the overall productivity of estuarine areas and, with time, exacerbate pressures already facing populations of this group of rays.