The golden langur is endemic to the Indo-Bhutan region, in a small area of western Assam in India and the foothills of the Black Mountains of neighbouring Bhutan. 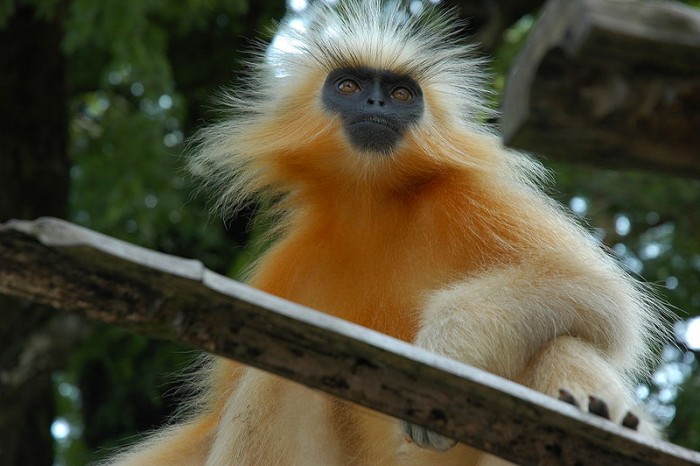 Image: By Doniv79 at en.wikipedia (Transferred from en.wikipedia) [CC-BY-SA-2.5 (http://creativecommons.org/licenses/by-sa/2.5)], from Wikimedia Commons

Two weeks ago I wrote about the new highway overpasses for migrating pronghorn antelope. Roads cause the deaths of so many animals that ingenious ways to help species avoid crossing them have sprung up all over the world, and this week’s blog shall focus on one such project in India, to save one of their most endangered primates.

The golden langur is endemic to the Indo-Bhutan region, in a small area of western Assam in India and the foothills of the Black Mountains of neighbouring Bhutan. The total Indian population numbers approximately 1,064 individuals in 130 groups (from a survey in 2001). They are listed under Schedule 1 of the Indian Wildlife Protection Act, 1972, Appendix I of CITES, and as Endangered on the IUCN Red List. The main region of its distribution is just 60 square miles, and they are suffering from loss of habitat. Large areas of forest have been cleared for timber and to make way for development and agriculture, and the langurs are now mainly restricted to forest reserves which are themselves suffering from illegal logging.

Plantations surround the golden langurs’ habitat, and by crossing into a neighbouring plantation and using it as an extension of their habitat they put themselves at great risk. Golden langurs are mainly arboreal animals and are rarely on the ground. But to get to the plantation they were compelled to descend to ground level to cross a 500-meter stretch of road near the Chakrashila Wildlife Sanctuary, at risk of car accidents, attacks by feral dogs and poachers. The result was 10 langur deaths recorded since 2005 and no doubt many more going unnoticed.

As part of the Bodoland (an area of Assam) Greater Manas Conservation Project, in January this year authorities teamed up with IFAW and the Wildlife Trust of India to help the langurs cross the road. Ropeways seventeen feet long made of bamboo and rope were created at a height of 60 metres from the ground and placed between the canopies of trees at crossing places used by the langurs. Although initially hesitant, the langurs are now regularly spotted using the ropeways, and since their construction, there have been no deaths due to accidents on the road.

Golden langurs, long considered sacred by many Himalayan people, were only discovered in 1956 and little is known about these elusive monkeys. The ropeways, along with new reforestation and community education programmes, mean that these endangered primates have now been thrown a lifeline.