Although reindeer populations are naturally cyclical with numbers going up and down, it is man-made elements that are now behind this recent decline.

By Alex Taylor on 8th February 2012 in World Conservation Issues 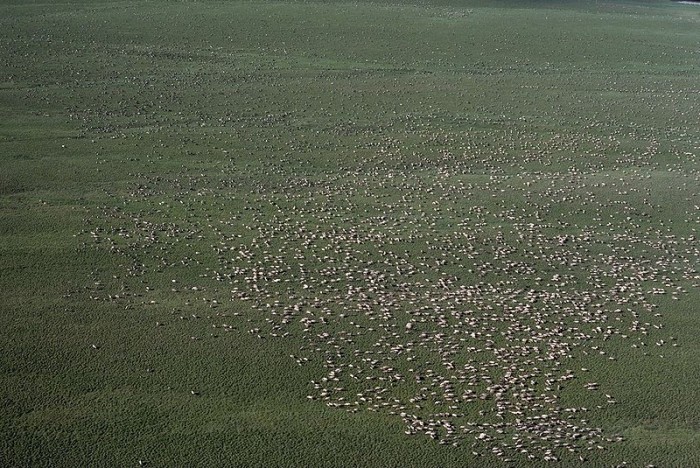 Surveys results revealed, rather appropriately, at Christmas time last year have documented an alarming decline in numbers of the world’s largest reindeer herd, mirroring the trends observed in other herds across North America.

Reindeer (or caribou) live in the barren grasslands and boreal woodlands of the tundra. The George River herd roams throughout Quebec and Labrador in Canada and in the early 1990s numbered 900,000. A decade ago their numbers fell to 385,000, but recent surveys have estimated that only 50,000 individuals remain. Although reindeer populations are naturally cyclical with numbers going up and down, it is man-made elements that are now behind this recent decline.

Government biologists state that the exact reason for the decline remains a mystery, but blame a combination of predation, disease, parasites and the effects of climate change. Unpredictable weather patterns are causing increased mortality and the escalating intensity and frequency of forest fires. In addition, more winter rain and ice is making it hard for the reindeer to dig for the food that lies under the snow. Perhaps most worryingly is that the timing between reindeer arriving at the calving grounds and the growth of spring plants, calibrated over thousands of years, is becoming more and more mismatched, seriously threatening calf survival.

The government has imposed tighter sanctions on the hunting season this year, with commercial hunting banned, individual hunters allowed only one animal, and the whole season reduced from eight months to three. However, restrictions were placed on harvesting in 2010, yet the decline still continues.

Indigenous people such as the Innu tribe share a cultural and spiritual bond with reindeer, utilising their hide and meat for shelter, food and clothing. They believe that the true reason for plummeting populations is the encroachment of industrial development on the land, and accuse the government of and failing to regulate it and underestimating the threat. Large tracts of the reindeer’s traditional calving grounds have been dammed and flooded, and mining activities are disrupting migratory routes.

Indigenous people feel that they should be consulted about this encroachment onto their territory, and are now speaking up against big industry to protect their traditional way of life as well as the reindeer they are so deeply connected with.