The one place where this species is found naturally is a freshwater bog where the plants are in standing water, but it was found that the plant actually does better without standing water. 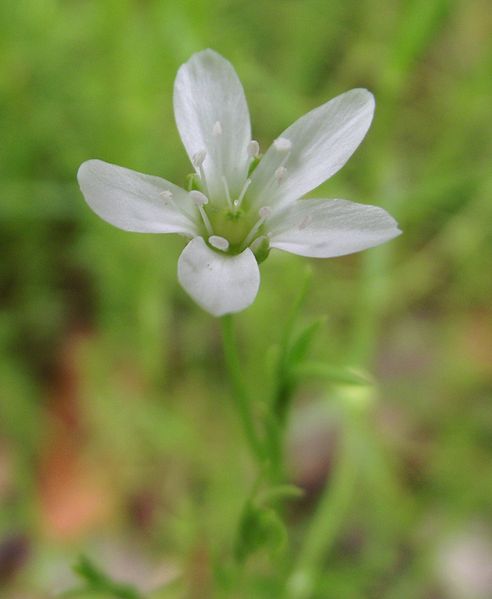 The marsh sandwort is an herbaceous green perennial plant found in the USA, historically along the Pacific Coast from Washington State to southern California. However, it is now restricted to a boggy wetland in San Luis Obispo County, California, having been extirpated in Washington and Oregon. It is a coastal species, found in wetlands and freshwater marshes, and it is changes to hydrology from drought, development and drilling that have caused to its decline. Habitat degradation and destruction, and competition with exotic species for light, water, nutrients and space have also contributed. It was listed as endangered in 1993, and only one naturally occurring population remains.

To conserve the plant, some reintroductions have been attempted but without much success. How do you know where a species will thrive if it is only found at one location and very little is known about its biology? Scientists from the US Fish and Wildlife Service recruited a plant ecologist from the University of California Santa Cruz to help answer this question.

Cuttings were propagated from the last remaining wild population, and the plant’s tolerance for different soil conditions was studied in greenhouse experiments. Field experiments were also carried out to identify habitats where the plant could thrive. The results, published in the April issue of Plant Ecology, surprised scientists, as it was discovered that the marsh sandwort tolerated a much wider range of soil moisture and salinity conditions than they had expected. The one place where this species is found naturally is a freshwater bog where the plants are in standing water, but it was found that the plant actually does better without standing water.

The plants in the reintroduced populations are now flowering and setting seed, a great outcome for the species because sexual reproduction has not been observed in the one remaining natural population. These experiments have therefore resulted in much more genetic diversity for this endangered species, and highlight the importance of these types of experiments for guiding the conservation of rare plants.