Bring Back the Lynx

Recognition of the valuable role it played here, mainly as a predator of deer, has led to calls for the lynx to be reintroduced to the UK. 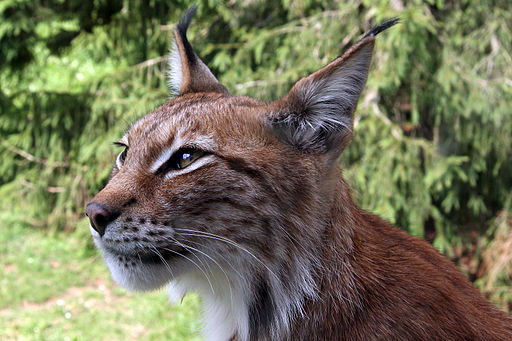 The Eurasian lynx is distributed across Western Europe, Russia and central Asia. It was once found in the UK but was wiped out by hunting and habitat destruction around 500AD. However, the recognition of the valuable role it played here, mainly as a predator of deer, has led to calls for the lynx to be reintroduced to the UK.

Paul O’Donoghue, Chief Scientific Advisor for Lynx UK Trust, said: “People have talked about the reintroduction of lynx for the past 20 years but no tangible progress has been made. Over the last year we’ve brought together an incredibly experienced team of international experts which puts us in a unique position to take this exciting project forward.”

Three privately owned release sites have been chosen for the release, after close consultation with landowners. Between four and six lynx will be fitted with radio tracking devices and released in Aberdeenshire, Cumbia and Norfolk. Each site is rich in deer and forest habitat, and the animals will be monitored 24 hours a day to see how they adapt and settle into the environment. Data gathered during this phase of the project will then be used to decide whether a UK-wide reintroduction should take place – a similar process to the trial release of beaver in Knapdale.

“Lynx will have an extremely beneficial effect on our forest ecosystems, both directly and as ambassadors for wider conservation projects. I also believe we should try to reintroduce an animal that humans made extinct here,” says Tony Marmont, owner of Grumack Forest in Aberdeenshire, one of the potential release sites.

Lynx have been reintroduced in many sites throughout Europe, with much success. Some of the benefits they have brought with them include improved forest conservation, reduction of pest species, a greater balance of biodiversity and economic opportunities for rural communities, with several eco-tourism ventures developing since the cats’ arrival. “We’re confident that we can achieve exactly the same thing here in the UK. Forests around these islands struggle against an over-abundance of deer, which is a classic problem to emerge when you lack apex predators. Wildcats and foxes can’t possibly control deer numbers, but lynx really can, and the economic possibilities for rural communities are incredible,” said O’Donoghue. And although farmers have concerns about the possible loss of livestock, he responds: “As a very dedicated forest animal, lynx will rarely come across agricultural animals; predation on them has been rare in Europe. We will be putting a full subsidy programme in place to reassure farmers anywhere near the reintroduction sites.”

The reintroduction has the support of many conservationists, but one issue has been raised regarding the species of lynx chosen. The Eurasian lynx is one of the least threatened species of cats in the world, with increasing populations in Europe. Perhaps the reintroduction of the Iberian lynx would be more appropriate. This species is the most threatened cat in the world, currently restricted to Spain and Portugal. Its ancestors lived throughout Europe, including in the UK, only becoming displaced by the Eurasian lynx. So instead of spending hundreds of thousands of pounds on a common species, maybe we should reintroduce an endangered one – one that appears to be the closest surviving relative of the original British lynx.