Through rewildling, a conservation measure that is becoming more popular across the globe, bison are now being returned to the wild, where they once lived, back where they belong.

By Alex Taylor on 22nd May 2013 in World Conservation Issues 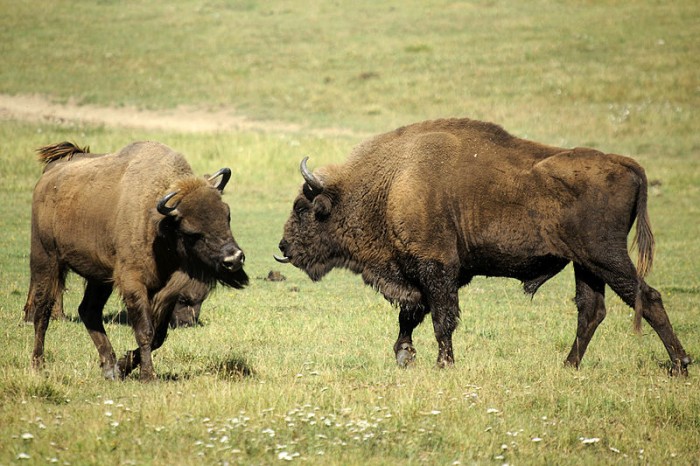 Bison once roamed throughout Europe. But by the 1920s, hunting and large scale deforestation had caused their populations to plummet, and they were declared extinct in the wild. Through rewildling, a conservation measure that is becoming more popular across the globe, bison are now being returned to the wild, where they once lived, back where they belong.

Last month, a small herd consisting of one adult bull, five cows and two calves were released into a 10,000 hectare forest in the Bad Berleburg region of Germany. The animals had been kept in an enclosure for the past 3 years, while being intensively studied by scientists who were analysing the role bison play in the ecosystem and their impacts on biodiversity and forestry, as well as the behaviour between man and bison. Now that they have been released, two of the animals are fitted with radio-transmitters so that they can be tracked, and it is hoped that the herd will grow to 25 individuals. This is the first free roaming herd in Western Europe for 400 years.

A second release of bison has also taken place in the Carpathian Mountains, in Romania. Five animals aged between 3 and 7 had been raised in zoos but were released into the Vanatori – Neamt Nature Park, also fitted with radio-transmitters and are being provided with food before they become fully independent and wild. The first group of five animals were released in March 2012 and radio-transmitters have shown that they have used a forest area of around 2,000 hectares. Nearly 200 years since European bison disappeared from the Carpathians, the first two births have taken place, the best indication that they are adapting well to their new surroundings. However, experts state that a population of 20-25 individuals must be reintroduced to ensure that the project is viable.

The project is supported by WWF, who are now aiming to replicate the success in a pilot area in the Southern Carpathians. They would be assisted by Rewildling Europe, an initiative which aims to rewild one million hectares of land by 2020. Hopefully, many more herds of bison will once again be roaming the wilderness in the near future.