Chimpanzees at the Crossroads

Research shows that chimpanzees react to changes to their habitats by adapting to human development, such as learning to cross roads safely and knowing when to avoid people. However, further development could seriously harm their abundance and distribution. 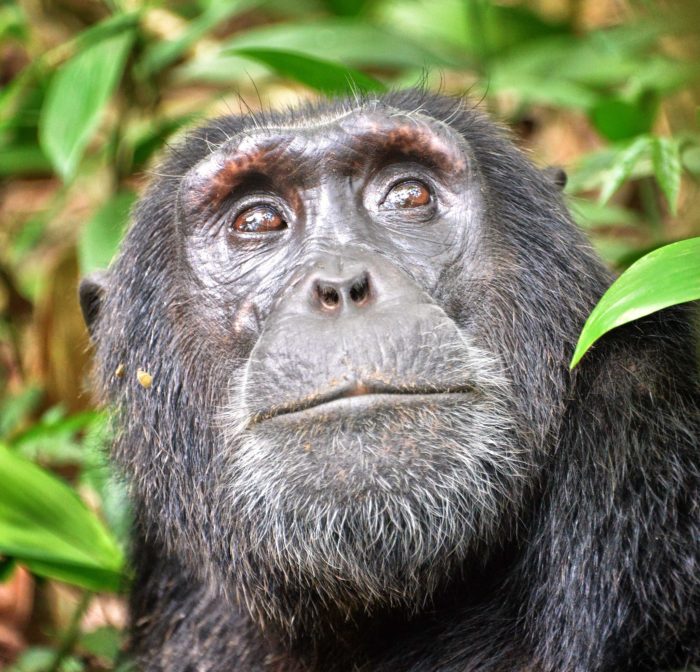 Research carried out into the impact of changes to chimpanzee habitats found they have adapted to human developments in a number of ways – including learning how to cross roads safely and the best times to visit human habitats – but their survival is still threatened.

A team of anthropologists from the University of Kent and universities in Spain, in collaboration with the Tacugama Chimpanzee Sanctuary in Sierra Leone, made their discoveries from hidden cameras during an eight-month study in the African country. The research team used 24 infra-red digital camera traps deployed between 2015 and 2016 for a total of 8 months across 27 1.25×1.25 km grids in the Moyamba district in south-western Sierra Leone. Their results were published in PLOS ONE.

West Africa has one of the most fragmented tropical forest landscapes in the world due to high levels of deforestation. Chimpanzees in the region are critically endangered with the majority living outside protected areas.

The research found that chimpanzees do not avoid areas frequented by people, possibly due to human tolerance and low levels of hunting in the study area, but they did not visit areas humans use at midday when human activity was more prevalent. Around settlements, farmers grow fruits that attract chimpanzees despite the risks of encounter with people. The cameras captured images of chimpanzees eating domesticated fruits like mangos and pineapples that were cultivated close to human settlements.

Although chimpanzees living in fragmented habitats cross roads to move from one area to another of their home range and may approach human settlements, any further road widening, tarmacking or expansion and urbanisation could significantly affect their distribution and abundance.

Consequently, the research team suggests care with infrastructure development, as well as developing agreements with farmers to allow strategic fallow areas to regenerate into community-managed forest refuges providing corridors for wildlife and vital natural resources and ecosystem services for both humans and wildlife.

Dr Tatyana Humle, University of Kent expert in primate behaviour and one of the research team, said: “If we want to secure their long-term survival, it is crucial that successful protection measures should benefit people and chimpanzees alike. Conservation actions should focus on education and helping farmers to implement alternative agricultural methods to slash and burn farming and environmentally-friendly revenue generating activities to ensure coexistence between the two species.”

In a landscape heavily impacted by subsistence agriculture, with many swamps and minimal forest, the researchers found that chimpanzees can survive if habitat loss is gradual, key wild resources such as the native oil palm are abundant and if people are tolerant of their presence. However, chimpanzees in such landscapes tend to avoid roads, including untarmacked secondary roads, and prefer to range in close proximity to the swamps.

Approximately 60% of all world’s non-human primates are threatened with extinction and chimpanzees face serious threats in West Africa, including death from disease, habitat loss, poaching, and retaliation as a result of competition with people for resources.