When the time that plants are most nutritious differs from the time the animals need their nutrients the most, it is known as a trophic mismatch. 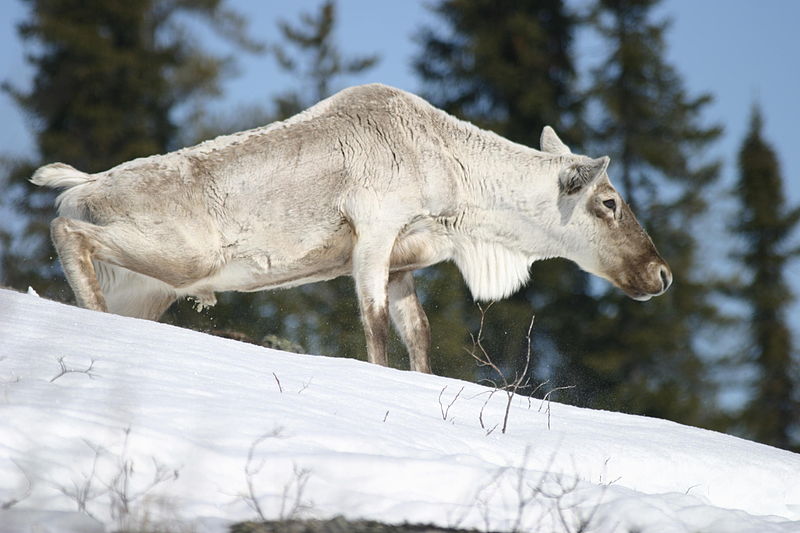 Image: By Mickael Brangeon(Peupleloup) (Own work) [FAL], via Wikimedia Commons

As the climate warms, Arctic sea ice melts. The effect that this will have on the poster species of climate change, the polar bear, is well known. But a new study by scientists from Penn State University, recently published in Nature Communications, has shown that terrestrial species can also be affected by the ice melt at sea.

The scientists discovered that, through a chain reaction, climate change is impacting the survival rates of caribou calves. They studied the caribou at a breeding ground in the mountains near Kangerlussuaq in Greenland. Archaeological evidence suggests that caribou have used this area as a calving site for more than 3,000 years. They arrive there in May and June to give birth.

When the caribou arrive at their breeding ground, they feed on newly-emerged plants. The nutrients in the tender young shoots of plants such as willow, sedges and flowering tundra herbs are extremely beneficial to the caribou. Between 2002 and 2011, the scientists noted when the plants began to grow. This date got earlier and earlier, by 1.6 days each year. Plants respond to warmer temperatures by adjusting the timing of their growth, but the reproductive cycle of caribou is timed by seasonal changes such as daylight length. This means that the caribou cannot keep up – the plants emerge earlier but the caribou continue to give birth at the same time each year. When the time that plants are most nutritious differs from the time the animals need their nutrients the most, it is known as a trophic mismatch.

Arctic sea ice has been declining particularly dramatically since 2000. Ice loss is linked to warmer inland temperatures, and it is this warming that has triggered the early plant growth. When the greater majority of plants had already emerged at the average date that caribou gave birth, the mortality rate of the calves increased. The plants were already past their peak nutritional value by the time the caribou arrived at the breeding ground.

This study shows that sea ice melt could affect how species interact, and we must consider not just how it impacts species that depend upon the sea ice, but those that live on land too.