The decline can be traced back to the Rwandan genocide in 1994, which forced hundreds of thousands of refugees to flee the Democratic Republic of Congo (DCR), the only country in which the Grauer’s gorilla is found. 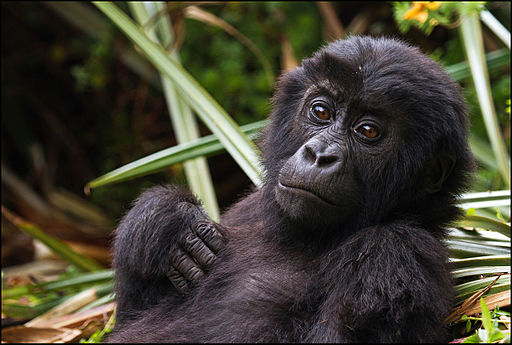 A new report from the Wildlife Conservation Society and Fauna & Flora International documents a catastrophic collapse in numbers of the world’s largest great ape – the Grauer’s gorilla. A combination of threats has caused a decline of 77%, from an estimated population of 17,000 in 1995 to just 3,800 individuals today.

The decline can be traced back to the Rwandan genocide in 1994, which forced hundreds of thousands of refugees to flee the Democratic Republic of Congo (DCR), the only country in which the Grauer’s gorilla is found. This mass movement of people led to the civil war in DCR from 1996 to 2003, during which around 5 million people were killed. The war also took its toll on the country’s wildlife, as a result of insecurity, a heightened illegal bushmeat trade and increased deforestation.

Today, one of the main threats to these animals is the expansion of mining for coltan (a key mineral used in the manufacture of mobile phones and other electronics) within the gorillas’ range. Because most of these mining sites are remote, the miners often turn to the local wildlife for food. Despite being protected by law, the gorillas are highly prized as bushmeat due to their large size (up to 400 pounds) and because they can be easily tracked and killed as they move in groups on the ground.

The authors of the report state that the findings justify raising the threatened status of the Grauer’s gorilla to ‘critically endangered’ on the IUCN’s Red List. This move would mean that all four gorilla subspecies would be in the critically endangered category. They also call for additional actions to try to reverse the huge decline. These actions include tackling illegal mining inside protected areas, disarming the militia groups that operate in the gorillas’ range, close monitoring of gorilla families, supporting park staff and community ecoguards that are protecting the gorillas and their habitat, finding alternative sources of income for local people other than employment from mining, and lobbying electronics companies to ensure that they source minerals from mining sites that do not hunt bushmeat. However, they point out that halting and reversing the decline of Grauer’s gorilla will not only take considerable effort, it will require more funding than is currently available.

Stuart Nixon of Fauna & Flora International, one of the co-authors involved in the study stated, “Grauer’s gorilla is found only in the eastern Congo – one of the richest areas on our planet for vertebrate diversity. As one of our closest living relatives, we have a duty to protect this gorilla from extinction. Unless greater investment and effort is made, we face the very real threat that this incredible primate will disappear from many parts of its range in the next five years. It’s vital that we act fast.”