Once this population was connected all along the mountain range, but now their population is fragmented. They are isolated from each other and, as a result, are vulnerable to the long-term risks of inbreeding, such as birth defects and infertility. 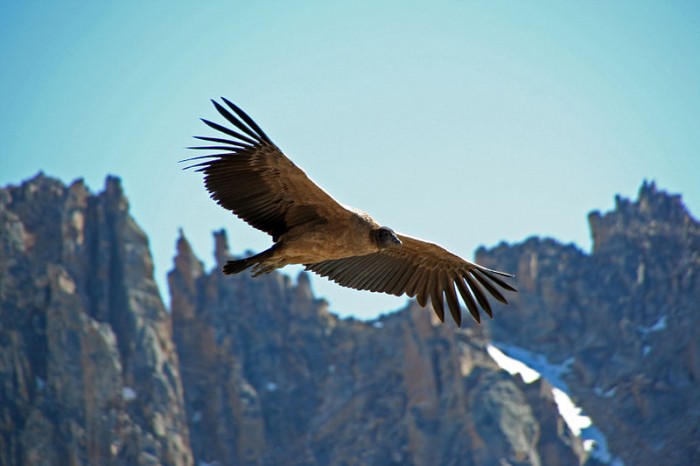 The Andean Condor is one of the largest and most impressive birds in the world. With a massive wingspan of 10 feet (3 metres), they can fly up to 100 miles (160km) in just one day. They inhabit the Andean Mountains in South America, ranging as far north as Columbia and south to Patagonia.

Once this population was connected all along the mountain range, but now their population is fragmented. They are isolated from each other and, as a result, are vulnerable to the long-term risks of inbreeding, such as birth defects and infertility. In total, there are believed to around 10,000 Andean Condors in the world, classified as ‘near threatened’ by the IUCN. In Peru, however, the Frankfurt Zoological Society estimates there to be no more than 500 condors left.

The threats of hunting, trade in feathers and body parts, habitat loss, the modernisation of farming and a decreasing supply of carrion have all played their part in their decline in Peru. But a growing, and illegal, threat is a local ritual called the “Yawar” festival. During this festival, a condor is strapped to the back of a bull. The clawing of the bird’s talons enrages the bull, and the local people take turns to run in front of it. It is supposed to demonstrate the triumph of indigenous culture, represented by the condor, over the colonial influence, represented by the bull. Ultimately, the bull is slaughtered and the condor is set free, however, the condor often suffers from broken bones if the bull falls on its side or crashes into a wall, not to mention the trauma both condor and bull must experience. Conservationists estimate that 10-20% of condors are killed during the festivals.

Some festivals use several condors, and up to 55 festivals take place each year. And Peru’s growing economy means that this number may increase further. More and more Peruvians from rural areas are making money in cities and then returning to their local village. They are rich enough to sponsor a Yawar festival, which has become a status symbol.

Politicians are fighting back – a bill has been introduced to the Peruvian Congress that would help to protect the birds. The law would declare them to be a “national treasure” and anybody who hurts or kills a condor would face a jail sentence of between 3 and 5 years. The bill would also lead to the creation of a captive breeding programme. As Andean Condors do not reproduce until they are 5 years old, and lay only one or two eggs every other year, they will need this help to allow their numbers to recover.

Andean people have held the belief that Andean Condors are sacred for thousands of years. One of the best known of the Nazca Lines (the geoglyphs that were mysteriously carved into the Peruvian desert over 1,500 years ago) is the depiction of a 445 foot (135m) condor. Hopefully the new law, alongside conservation measures, will ensure that this is not the only image of an Andean Condor left in Peru in years to come.