They may be competing for the same food or they may occupy the same niche. It is also thought that maybe the dolphins use the porpoises to practice fighting and catching prey, but the scientists that study this behaviour are no closer to agreeing on an answer. 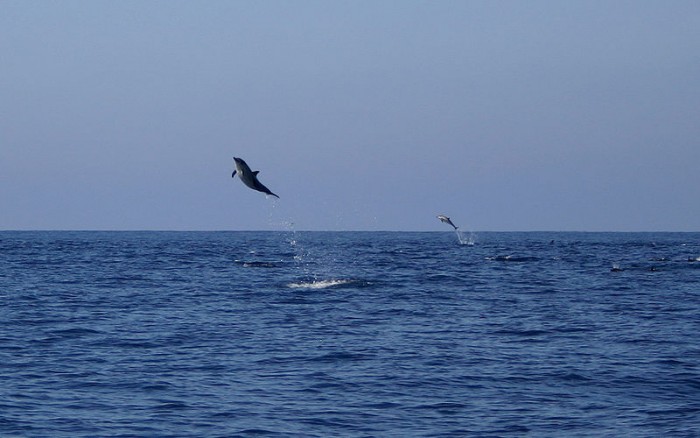 Image: By Erichstull (Own work) [CC-BY-3.0 (http://creativecommons.org/licenses/by/3.0)], via Wikimedia Commons

As you may or may not know, Wales has a marine protected area devoted to the preservation of dolphins and porpoises near Cardigan Bay. This is a brilliant step towards conserving these popular and charismatic species. However, these two species have not been known to live together harmoniously, especially in Britain where the first dolphin-killed porpoise was discovered.

Dolphins have been seen to actively seek out porpoises in order to maim and kill them. They use their bodies to forcefully push the porpoise out of its group. Then the dolphins attack it with their snout, teeth and fins until the porpoise dies. The dead porpoises can be found washed up on beaches and the most common dolphin related injuries found are: teeth marks, ruptured livers, haemorrhage tears inside the blubber layer, imploded lungs and collapsed chest walls. It is thought by some that the dolphins use their ultrasound abilities to ‘hone in’ on the vital organs of the porpoises, although they do not eat their prey.

Dolphins do not like porpoises in the slightest, although it is not known why. There have been many theories; they may be competing for the same food or they may occupy the same niche. It is also thought that maybe the dolphins use the porpoises to practice fighting and catching prey, but the scientists that study this behaviour are no closer to agreeing on an answer. One interesting point to note is that there are more stranding’s of injured porpoises during the dolphin mating season. Also those dolphins seen to ‘bully’ porpoises are recorded to be mostly young males. This has led some scientists believe that the behaviour is more practicing how to fight for mating rights.

How do you conserve two species in the same area, when one is viciously murdering the other? This behaviour just goes to show our lack of knowledge about the marine world, even in those charismatic species that so many studies have already been completed on. I believe that we cannot conserve these two species together, but how can we separate them in a large expanse of marine environment? Or is this just evolution in its basic form and should be left to its own devices?