The removal of these animals from the ecosystem upsets the natural balance and leads to a loss of heavy-wooded large trees. 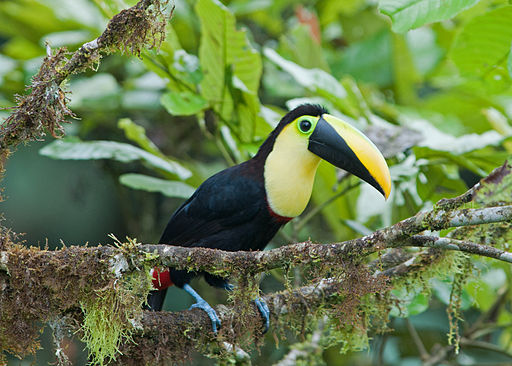 The extinction of large animals from tropical forests could make climate change worse. The decline of fruit-eating animals, such as large primates, tapirs and toucans, means that there is reduced seed dispersal of large trees and therefore fewer trees in forests to soak up global carbon dioxide emissions.

A new study, published in Science Advances, has shown that hunting and poaching of large tropical animals could change the species composition of rainforests. Seed dispersal by large-bodied vertebrates is via the ingestion of viable seeds that pass through their digestive tracts intact. The removal of these animals from the ecosystem upsets the natural balance and leads to a loss of heavy-wooded large trees, and may reduce a tropical forest’s ability to store carbon by between 5 and 20%, depending on the trees species that are present in a given area.

A research team from Brazil, Spain, Finland and the UK studied data from more than 2,000 trees species in Brazil’s Atlantic Forest, and more than 800 animal species. They found that fruit-eaters (frugivores) that are not targeted by hunters, such as small bats and birds, are only able to disperse small seeds from small trees. But large, heavy-wooded trees – the ones that capture and store greater amounts of carbon – are associated with larger seeds that can only be dispersed by large animals, those which are targeted by hunters.

Professor Mauro Galetti from São Paulo State University said: “The big frugivores, such as large primates, the tapir, the toucans, among other large animals, are the only ones able to effectively disperse plants that have large seeds. Usually, the trees that have large seeds are also big trees with dense wood that store more carbon.

Carolina Bello, a PhD student from the São Paulo State University, added: “When we lose large frugivores we are losing dispersal and recruitment functions of large seeded trees and therefore, the composition of tropical forests changes. The result is a forest dominated by smaller trees with milder woods which stock less carbon.”

Professor Carlos Peres, from University of East Anglia’s School of Environmental Sciences, said: “Large birds and mammals provide almost all the seed dispersal services for large-seeded plants. Several large vertebrates are threatened by hunting, illegal trade and habitat loss. But the steep decline of the megafauna in overhunted tropical forest ecosystems can bring about large unforeseen impacts. We show that the decline and extinction of large animals will over time induce a decline in large hardwood trees. This in turn negatively affects the capacity of tropical forests to store carbon and therefore their potential to counter climate change.”

Tropical forests, especially the Amazon and Africa’s tropical rainforests, as well as the Atlantic forest, are the earth’s largest and densest natural carbon sinks. In their trunks and roots they store more than 25% of our carbon dioxide emissions. More research is needed before scientists can quantify the full effects but this study provides even more evidence that biological diversity and healthy forest ecosystems are essential if we are to have a healthy climate.