Scientists have discovered that Southeast Asia’s large fruit bats, known as flying foxes, play a crucial role in the survival of the durian tree, and their decline could have serious economic repercussions. 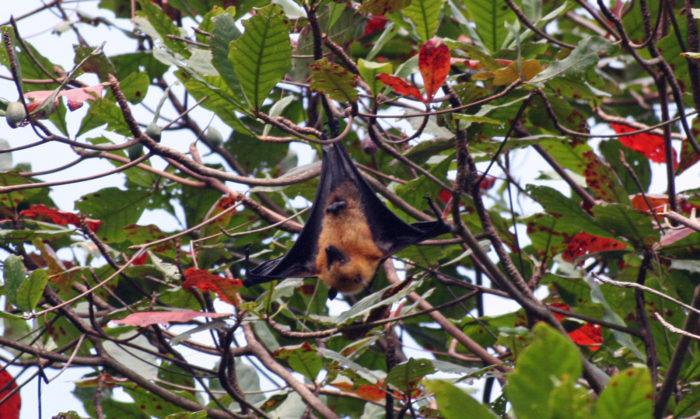 Scientists have discovered that Southeast Asia’s endangered fruit bats, commonly known as flying foxes, play an important role in the pollination of the iconic and economically important durian tree. The findings were published recently in the Journal of Ecology and Evolution.

The video footage was captured on Tioman Island by a team led by Dr Sheema Abdul Aziz as part of her PhD at the Muséum National d’Histoire Naturelle (France) in collaboration with the University of Nottingham Malaysia Campus. Dr Sheema said: “These are very important findings because they shed more light on the crucial ecosystem services provided by flying foxes. Previously it was known that the smaller, nectar-feeding bats are pollinators for durian – but many people believed that flying foxes were too large and destructive to play such a role. Our study shows the exact opposite: that these giant fruit bats are actually very effective in pollinating durian trees.”

The tropical durian fruit, famous for its spikey skin and distinctive odour, is highly prized throughout Malaysia and Thailand. It is an icon of Southeast Asian culture, and a lucrative industry that generates millions of US dollars in local and international trade. Large fruit bats such as flying foxes were previously believed to be destructive rather than beneficial, but the new findings suggest that the economic profits owe a huge debt to these animals.

Dr Ahimsa Campos-Arceiz, from the School of Environment and Geographical Sciences of the University of Nottingham Malaysia Campus and one of the co-authors of the study, said: “The durian is a fascinating plant that, with its flowers pollinated by bats and its seeds dispersed by large animals like elephants, beautifully exemplifies the importance of plant animal interactions. The durian fruit is particularly famous for its pungent smell and unique taste, adored by most people in Southeast Asia and so often misunderstood – abhorred? – by westerners. We hope this study brings attention to the urgency of conserving flying foxes in Southeast Asia.”

Flying fox populations are in severe decline. Large fruit bats of the genus Pteropus, to which the island flying fox belongs, are severely threatened by hunting and deforestation. They are often sold and eaten as exotic meat due to an unsubstantiated belief that consuming them can help cure asthma and other respiratory problems. They are also persecuted and killed as agricultural pests, as some people claim that the bats cause damage and economic loss by feeding on cultivated fruits. All of these factors have led to a serious reduction of flying fox populations throughout the world – the island flying fox, featured in this study, is already classified as ‘endangered’ on  Malaysia’s National Red List.

Yet the study shows that these bats play important roles as seed dispersers and pollinators in rainforests, especially on islands. Their disappearance could therefore have repercussions for tropical ecosystems, possibly resulting in a decline of durian fruit in Southeast Asia. Dr Sheema said: “If people end up hunting flying foxes to extinction, it’s not hard to see that there could be serious implications for Southeast Asia’s beloved ‘King of Fruits’.”