Lemurs are some of the world’s most endangered animals. But they play a vital role in their ecosystems, and a new study has shown that saving them may be the key to saving Madagascar’s largest trees. 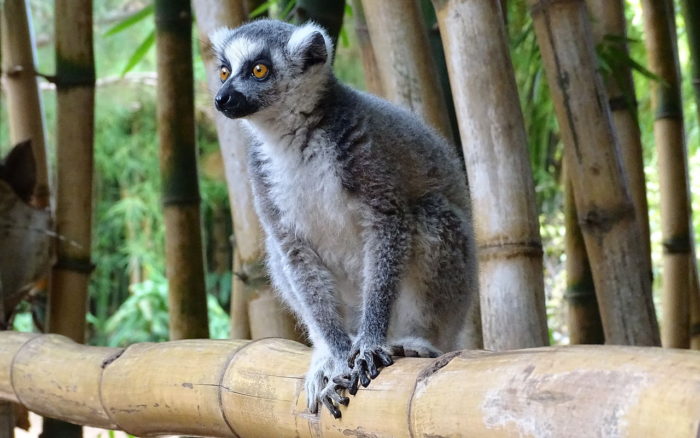 Think Madagascar, think lemurs. On the large and isolated island, free from much competition or predation, or the evolutionary changes of the world, Madagascar’s iconic lemurs radiated into many niches. Today lemurs are found in virtually all of the country’s ecosystems. There are around 100 species and subspecies of lemurs on the island, ranging in size from the 25g pygmy mouse lemur to the indri, which can weigh up to 9.6kg. And this number will probably rise in future, as field studies and molecular genetic research continues.

All these species are endemic to Madagascar (they are found nowhere else in the world, although two lemur species have been introduced to the Comoros) giving the country the second highest number of primate species after Brazil, which has 77 species. Madagascar is one of 92 countries with wild primate populations, but it alone is responsible for 21% of all primate genera and 36% of all primate families. This makes it a one of the highest priorities for primate conservation. In fact, the country is so important for primates that primatologists divide the world into four major regions – the whole of South and Central America, all of southern and southeast Asia, the entire mainland African continent and Madagascar.

Sadly, most species of lemur are listed on the IUCN’s Red List as either ‘critically endangered’, ‘endangered’ or ‘vulnerable’. They are threatened by a range of environmental problems, including deforestation and conversion of their habitat into agricultural land, hunting for bushmeat, capture for the live exotic pet trade, and climate change.

Yet lemurs play a vital role in their ecosystems, and a new study by Rice University ecologists illustrates how saving the animals may also be key to saving the island’s largest trees.

“Forest loss is a huge problem in Madagascar right now, but our study suggests that just saving the trees is not enough,” said Amy Dunham, associate professor of biosciences at Rice and co-author of the study, published in the International Journal of Primatology. “Not only are we facing the loss of these unique, charismatic animals, we’re also losing their role in the ecosystem. Without lemurs, the rainforests themselves will change because the lemurs alone disperse the seeds of many of the forests’ largest hardwoods.”

The study builds upon nearly a decade of collaborative work by Dunham and lead author Onja Razafindratsima at the island nation’s Ranomafana National Park.

Lemurs mostly eat fruit, and for many of the largest trees in Madagascar, lemurs are the only animals large enough to ingest the seeds of their fruit. By dispersing seeds throughout the forest in their scat, lemurs serve as the unwitting gardeners of these large canopy trees.

In earlier work, Razafindratsima meticulously tracked 24 groups of lemurs for three years and showed that the seeds of one species of canopy tree had a 300% greater chance of sprouting and becoming a sapling when they were dispersed by lemurs as opposed to simply falling to the ground.

“That work and other studies have suggested that lemur loss is likely to reduce regeneration of trees that rely on lemurs for seed dispersal,” Dunham said. “In the latest study, we wanted to take a broader approach to understanding how the forest might change with lemur loss.”

In 2016, Rice undergraduate Anecia Gentles joined Dunham’s research group and spent a year examining characteristics of rainforest trees and programming computational models to estimate how the forest would change if lemurs disappeared. The team showed that lemurs are not only important as gardeners of the forest but also likely play an important role in forest carbon sequestration.

“We found that lemurs are the primary seed dispersers of the largest canopy trees. The models suggested that the loss of lemurs and the trees they disperse could lead to increasing abundances of smaller, fast-growing tree species with lighter wood,” said Gentles.

Dunham added: “The biggest trees in Madagascar are dense hardwoods that grow more slowly but also store more carbon. They also tend to have the biggest seeds.”

The team used trait measurements from more than 7,000 trees of nearly 300 species. The data were collected as part of the Tropical Ecology Assessment and Monitoring (TEAM) Network, a years long effort led by study co-authors Jean-Claude Razafimahaimodison and Claude Ralazampirenena, Malagasy scientists from the Centre ValBio, a research station at Ranomafana National Park.

“We used TEAM Network data, new data and previously published data on animal seed dispersal in the park to make models that show what would happen if lemur-dispersed trees started disappearing and were replaced by trees whose seeds are dispersed by birds, the wind or other methods less affected by human activities,” Dunham said.

“There still would be a forest, but the makeup of trees would be quite different, and the forest’s ability to sequester carbon would be greatly diminished. For example, in the case where all lemur-dispersed trees disappear from just one hectare of forest, a patch of two 1/2 acres, the average loss of above-ground biomass is 24 metric tons – or almost 53,000 pounds,” says Dunham.

She said the findings have implications for initiatives like the United Nations’ REDD program, which incentivises carbon sequestration through forest conservation. She adds: “The goal of such programs is to preserve forests, because there’s a lot of carbon in the biomass of trees. At the same time, tropical forest ecosystems globally are threatened by the loss of large fruit-eating animals, and there’s growing evidence that we need to think more holistically about conserving functioning ecosystems in order to save forests. For Malagasy forests, our study connects the dots and shows that integrated forest protection and lemur conservation are required in order to maximize carbon-storage potential.”