Sadly, poaching remains a problem, not for food but for Chinese traditional medicine. The translucent, foot-long horns belonging to the males are ground into a powder and used for the treatment of headaches and fever, and a pound of powder can fetch US$2,000. 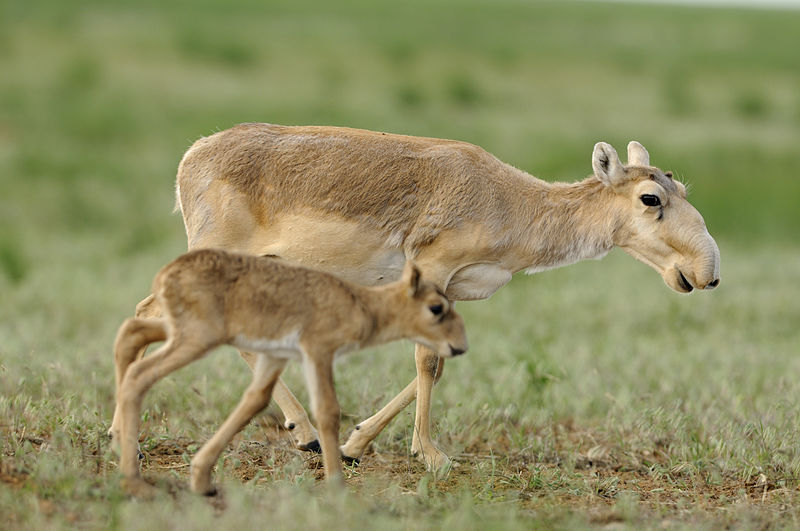 You may not have heard of Saiga antelope, but with their tubular, bulbous noses you can’t forget them once you see them. Saiga live in the arid grasslands of Eastern Europe and Central Asia, and on their long migrations can reach speeds of up to 50 miles (80km) per hour. They are also one of the world’s most endangered antelopes, however conservation efforts are now starting to pay off.

As recently as last century, saiga were prolific, numbering more than 2 million animals. But with the break-up of the Soviet Union came their downfall. Economic hardships during the late 1980s and 1990s caused poaching to rise as saiga were killed and eaten to supplement a much reduced diet. In just 15 years, their numbers fell by almost 95%. Sadly, poaching remains a problem, not for food but for Chinese traditional medicine. The translucent, foot-long horns belonging to the males are ground into a powder and used for the treatment of headaches and fever, and a pound of powder can fetch US$2,000. To catch the saiga, poachers chase them with cars or motorbikes until the antelopes collapse from exhaustion.  Saiga were added to the IUCN Red List of critically endangered species in 2002.

A network of conservationists and scientists have formed the Saiga Conservation Alliance, to try to increase saiga numbers in the countries in which they live – Uzbekistan, Kazakhstan, Russia and Mongolia. Each of these countries has signed a memorandum to preserve Saiga habitat and grow their populations. The Wildlife Conservation Society has been conducting research on saiga populations, and individuals have been caught and tagged to monitor their status. Local people are also being educated about the need to protect saiga, animals that were once regarded as holy by indigenous groups.

These efforts are already yielding results. Kazakhstan is home to 90% of the world’s Saiga, and protected areas have been established there across a region the size of France. The hope there is to return Saiga to their early 1990s population level of half a million. So far, from a low of 20,000 – 30,000 animals a few years ago, they now number over 150,000. The Kazakh Ministry of Environmental Protection has announced that it has budgeted $14 million for future conservation and education. Poaching is also declining. And the saiga’s own fertility helps. Females start giving birth when they are just 1 year old, and often produce twins or triplets. With a female life span averaging ten years, she can produce as many as 20 young in her lifetime.

Saving the Saiga has not been easy, but governments and conservationists are working hard to ensure that they are roaming the steppe in plentiful numbers once again.