By Alex Taylor on 20th November 2015 in Animal Conservation 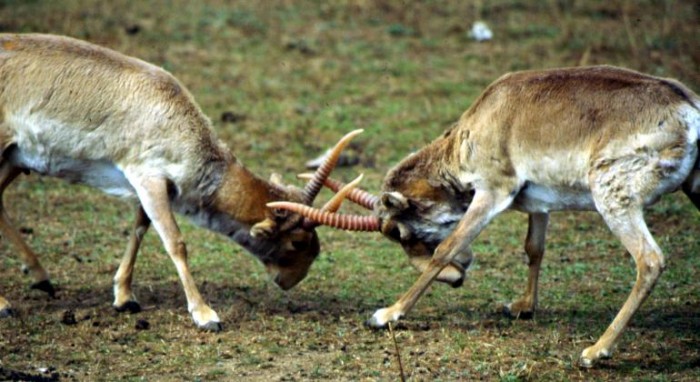 The massive die-off of saiga antelopes in Kazakhstan continues, with more than 70% of the global population dead in the space of just two weeks in May this year. Although deaths were reported at the time, it is now known that the number of dead animals was vastly underestimated. In total, over 200,000 saiga died at a critical time for the animals – calving season. Disease is suspected, but conclusive proof remains elusive.

Huge herds of millions of saiga once had a vast range, from the United Kingdom to North America. However, they are now restricted to the steppes of Central Asia, in five countries – Kazakhstan, Mongolia, Uzbekistan, Turkmenistan and Russia. They have been in decline since the end of the last century, with poachers almost driving them to extinction. The political collapse that accompanied the fall of the Soviet Union enabled rampant poaching for the saigas’ horns and meat. Demand for horns used in traditional medicine in China and Southeast Asia has increased rapidly in recent decades, which has meant a 97% decline in the species’ population. By the 1990s there were just 50,000 saigas left.

By 2010 there were around 81,000 left, but this year marked the start of the saiga die-offs. In Kazakhstan, one of the few countries that still held populations of saiga, around 12,000 died suddenly. The next year, hundreds more died. In 2012, the total dead was 1,000 individuals. The cycle then seemed to turn around in 2013, and the saiga population in Kazakhstan had reportedly risen to 137,000, despite the deaths in the years before. It seemed like efforts to preserve their habitat and improve their ability to migrate had paid off. The population continued to increase, and by early this year the total population was estimated to be more than a quarter of a million.

Yet this spring, another die-off event occurred, with over 200,000 saiga dead. This equates to more than 70% of the species’ total population and entire herds were wiped out. As it happened during calving season, it could take generations for the species to recover. Cause of the die-offs has not been proved conclusively, but the likely candidate seems to be a disease called pasteurellosis.

Scientists have conducted necropsies and found that the corpses showed signs of internal bleeding. Blood tests revealed that the saiga suffered massive infections of bacteria called Pasteurella multouida and Clostridium perfringens. These bacteria are normally harmless but can occasionally explode into deadly infections. Researchers have searched for factors that could have weakened the animals and left them more vulnerable to infection. Weather is a possibility – unusually stormy conditions in May caused sudden drops in temperature which, combined with bitter wind chills, may have lowered the saigas’ resistance. It is known that sudden changes to climate can weaken other species of grazing animals. This allows bacteria to overcome the defences of their hosts.

“Significant disease-related die-offs are not new events for the saiga,” said Dr. Denise McAloose, Head of Pathology for the Wildlife Conservation Society Health Program. “Much smaller but serious die-offs have occurred over the past few decades. What is surprising and of great concern in this case is the size and extent of the event – entire herds suffered near-100 percent mortality.”

Dr. Stephane Ostrowski, WCS Health Coordinator for Central Asia added, “This shows the danger of allowing species to decline and the importance of disease as a risk factor. Mortality events that once had limited impact on the large global population now have the potential to drive the few remaining animals quickly to extinction.”

In response to the deaths, the international conservation community came together in Tashkent, Uzbekistan to figure out how best to save the saiga from the threats to its survival. The meeting was led by the Convention on the Conservation of Migratory Species of Wild Animals, and involved delegates from Russia, Kazakhstan, Uzbekistan, Mongolia and China, and included conservation organisations such as the Wildlife Conservation Society, Frankfurt Zoological Society, World Wildlife Fund, Flora and Fauna International, as well as local organisations. The delegates discussed not just the disease, but other threats to saiga, including the increase in poaching as the population recovered, and the growth of development projects in the region, such as roads, railroads and border fences. They threaten to block the great migrations that saiga must undertake in order to avoid harsh snow and ice events in winter, and find food during the hot, dry summer months.

The group agreed upon a five-year plan that outlines actions to deal with these multiple threats. Plans include the need to more closely monitor the health of saiga and conduct more research, increase anti-poaching efforts and deal with the rapid rise of development projects.

The saiga is a fascinating animal,” said Peter Zahler, WCS Regional Director for Asia. “The species has evolved to survive in an extremely difficult environment, and while individuals appear to be very delicate, the species as a whole has shown great resistance.”

He added, “Until this die-off, the story of the saiga was one of human-induced tragedy followed by one of the world’s real conservation success stories. This die-off is a major setback, but it is also a wake-up call. If we come together and focus our efforts, we can help bring back the saiga, along with one of the greatest migratory spectacles that this world has ever known. This is an extraordinarily resilient species – now it is up to us to give it the chance to come back.”