The International Union for Conservation of Nature (IUCN) upgraded the Manta Ray’s 2006 classification from “near threatened/regionally vulnerable” to “vulnerable.” This was in response to growing demand for their gill rakers

By Alex Taylor on 21st December 2011 in World Conservation Issues 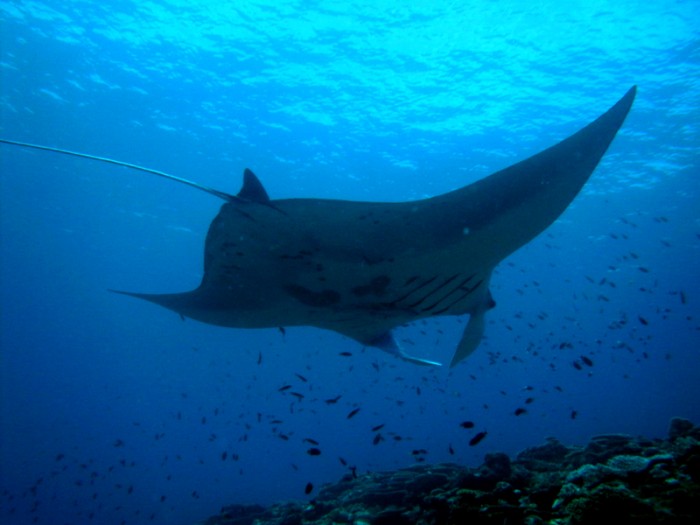 Image: By Agsftw (Own work) [CC-BY-SA-3.0 (http://creativecommons.org/licenses/by-sa/3.0) or GFDL (http://www.gnu.org/copyleft/fdl.html)], via Wikimedia Commons

The giant manta ray has been granted greater protections, bringing renewed hope for its future. Sadly though, this also means that in recent years they have come under ever increasing threat.

In November, the International Union for Conservation of Nature (IUCN) upgraded the Manta Ray’s 2006 classification from “near threatened/regionally vulnerable” to “vulnerable.” This was in response to growing demand for their gill rakers – cartilaginous projections along the gill arches used when filter-feeding for trapping food particles. The manta ray had previously been targeted by small scale subsistence fisheries, but since 2000 demand has grown rapidly so the trade has expanded into a global commercial industry. Demand has come from China, as the gill rakers are valued for traditional medicine. The financial incentive for poor fishermen is huge, and the IUCN report that targeted manta ray fisheries now operate in well-known aggregation sites and critical habitats in the Philippines, Mexico, Tanzania, Madagascar, Mozambique, Sri Lanka, India, Brazil and Indonesia. Between 2000 and 2007, the catch rate of the giant manta ray, and its close relative the devil ray, rose from 900 tons to 3300 tons per year. The global population of giant manta rays is believed to have declined by 30% over the last 75 years.

Following the uplisting by the IUCN, the giant manta ray has also gained protection under the United Nations Convention on Migratory Species of Wild Animals, an international treaty concerned with conserving migratory species and their habitats on a global scale. The giant manta ray is now listed under Appendix I (it is threatened with extinction) and Appendix II (it is a migratory species that needs or would significantly benefit from international co-operation). This new protection, initially proposed by the Government of Ecuador, means that the 116 countries that are party to the convention are obliged to provide protection and co-ordinate conservation efforts across national borders. However, this will be a challenge because of the slow reproductive cycle of giant manta rays, with a gestation period of over a year and only giving birth to one pup every few years.

Conservation efforts will probably start with the banning of targeted fishing, bringing hope for the future of these gentle giants of the oceans.