Today, gibbons are some of China’s most threatened species, surviving in only a few remote forest patches in the far southwest of the country. All four species face extinction.

By Alex Taylor on 12th August 2015 in Animal Conservation 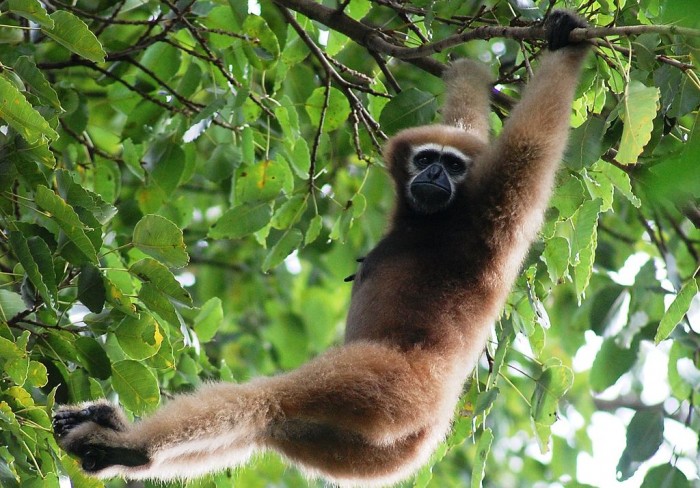 The decline of endangered species can usually be tracked over several decades, but the Zoological Society of London has recently documented the changing distributions of gibbons in China using historical records dating back 400 years. Their study, published in Proceedings of the Royal Society B, is one of the first instances of the use of ancient records to reconstruct the decline of endangered species.

Today, gibbons are some of China’s most threatened species, surviving in only a few remote forest patches in the far southwest of the country. All four species face extinction. Two species have completely disappeared in the last two decades and one species, the Hainan gibbon, is one of the rarest mammals in the world with only 26-28 individuals remaining in the wild. However, the study showed that only a few hundred years ago, gibbons were distributed across almost half of China’s vast landscape.

Pre-modern China did not have the same tradition of scientific publishing as European nations but what they did have was local gazetteers. These documents compiled economic, political, demographic and environmental data, including animal sightings. Although not a perfect record because they did not contain information on individual species, the gazetteers are nevertheless a better record for gibbons than any other animal because they were believed to have mythical or supernatural properties.

Dr Samuel Turvey, lead author, explains: “Gibbons were of great cultural importance in pre-modern China, because they were thought to be able to channel mystical “qi energy” and live for several hundred years, and their haunting dawn calls came to symbolise the melancholy of travellers in classical poetry. Their former presence over large regions of China was widely recorded in local documents, and reconstructing when – and why – different gibbon populations disappeared across much of China can teach us important lessons that can help save the country’s last few gibbons. China has a fantastically rich historical record, which includes a wealth of environmental data that has rarely been used for conservation management. Because of the current environmental crisis facing eastern and southeast Asia, we have to explore new ways to better understand the kinds of factors that can make species more or less vulnerable to extinction.”

The researchers collected 535 dated records of gibbons from 420 gazetteers. These were published during the Ming Dynasty (1368-1644), the Qing Dynasty (1644-1912) and the Republican period (1912-1949). Each record was translated and supplemented with historical data from the 20th Century as well as modern-day distribution data. All of this combined information was then used to map where gibbons have lived over the last five centuries.

Gibbons were found across most of central, southern and eastern China, in a total of 20 provinces, described by Dr Turvey as “a stark contrast to their very imperilled position today.” Starting in 1600, range contractions began. After 1850, populations were disappearing rapidly and by 1980, gibbons had vanished from 57.5% of regions in which they had once been found. By 1950, they had gone from 84.4% of those areas.

This pattern of disappearance matches the history of the expansion and migration of China’s human population, and is confirmed by accounts of European naturalists in the 18th and 19th Centuries who noted that gibbons were rare. The authors write: “Gibbon populations therefore appear to have been highly vulnerable to the wavefront of this internal Chinese human population expansion, which would probably have included combined increases in both forest loss and hunting.”

The results of the study show certain patterns that have implications for the gibbons that do survive today. Populations tend to be persistent at higher elevations, which is where all remaining gibbon populations currently reside. These elevations could be the limit of where gibbons can successfully live, a last refuge from where they have nowhere to go and which is probably not optimal for their survival. This could explain why gibbons in China exhibit behaviours, such as having very large home ranges, which are not witnessed in any other gibbon species elsewhere in Asia.

Data also indicates that a population that is isolated is a population at risk. Historically, once a population has become isolated, extinction follows in just 40 years. This is particularly concerning for the Hainan gibbon, which has been known to be isolated since 1980 and lives in just four social groups. Last year, Dr Turvey described this species as: “definitely the world’s rarest ape species, the rarest primate species, and one of the rarest mammal species. They’re kind of clinging on, literally and metaphorically, to patches of forest in the mountains which people haven’t gotten around to cutting down yet.”

Hainan gibbons live only in the rainforests of southern China’s Hainan Island in the 26 square mile-long Bawangling National Nature Reserve. The reserve was home to more than 2,000 gibbons in the late 1950s, but poachers and loggers slowly encroached on the area, leaving only 30 or so left by 1980, when the Chinese government declared the park a protected area. Between 2000 and 2010, a total of 72,000 hectares of rainforest was lost, mostly to make way for rubber and paper plantations. Even though both the species and its habitat is protected under Chinese law, with such a small population, a disease outbreak or extreme weather event like a typhoon could destroy their chances of survival.

There is hope – Dr Turvey says: “The Hainan gibbon is such a rare species, but knowing that this species is still hanging on there gives you hope that conservation will be able to bring that population back from the brink.” Yet identifying effective conservation measures must remain a high priority, the study warns. The clock is ticking.