The Abdullah Somali community runs the Ishaqbini Conservancy which is part of a network of 33 community conservancies, operating under the umbrella of the Northern Rangelands Trust.

By Alex Taylor on 17th March 2016 in Animal Conservation 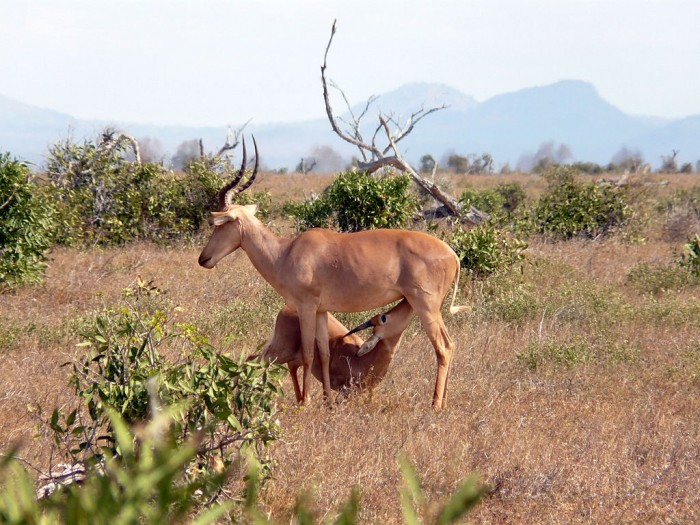 The hirola is one of the world’s most endangered antelope, with a global population of just 300-500 animals. It is the only remaining member of the genus Beatragus and according to the IUCN “the loss of hirola would be the first extinction of a mammalian genus on mainland Africa in modern human history.” Hirola are endemic to north-east Kenya and south-west Somalia, but since 1990 its population has declined by over 80%. It is currently listed as critically endangered – although the reasons for the species’ historic decline are unknown, they are thought to be disease (particularly rinderpest) and competition for food and water with domestic livestock (both caused by the hirola’s preference for areas used by livestock). Poaching is also a threat, as is habitat loss caused by bush encroachment as a result of the extirpation of elephants throughout the hirola’s range.

Despite the rarity of the hirola, conservation measures to help protect and save this species have been minimal. However, in recent years they have had champions in the form of the Somali pastoralists who live alongside them on the East bank of the Tana River. The Abdullah Somali community runs the Ishaqbini Conservancy which is part of a network of 33 community conservancies, operating under the umbrella of the Northern Rangelands Trust. In total, they manage over 42,000 square kilometres of land, stretching from the Indian Ocean to the Great Rift Valley. Their objective is to conserve wildlife, and also to build resilient livelihoods for rural communities and to secure peace – staff members are local people, a mix of ethnic groups that have historically fought with one another.

To help conserve the last remaining hirola in their area, the Ishaqbini community, helped by funds from the Northern Rangelands Trust, Kenya Wildlife Service and other organisations, built a 3,000 hectare, predator-proof enclosure. In August 2012, 48 hirola were herded up and moved into this sanctuary. Community members also raised awareness of the hirola’s plight amongst local people, dedicated rangers conducted anti-poaching patrols outside the sanctuary and, inside the sanctuary, full-time monitoring of the animals was carried out.

All this hard work was demonstrated to have paid off in January this year, when aerial and ground surveys revealed that around 97 hirola are now living in the sanctuary. From the initial population of 48, their numbers have doubled in just three and a half years. The surveys also revealed that several females are heavily pregnant, so more additions to the population will be made very soon.

The Northern Rangelands Trust’s Director of Conservation, Ian Craig said: “The 50% increase in hirola numbers epitomises the opportunity and strength of the growing community conservation movement across Kenya. The future of Kenya’s wildlife is inextricably linked with the development of the communities that live with wildlife. Kenya’s community conservancies are widely recognised across the world as one of the most innovative models in Africa empowering people to make informed decisions about management of their land whilst benefitting from wildlife and accessing new and alternative income.”