It is the last living representative of a 3 million year old evolutionary lineage, but is critically endangered. 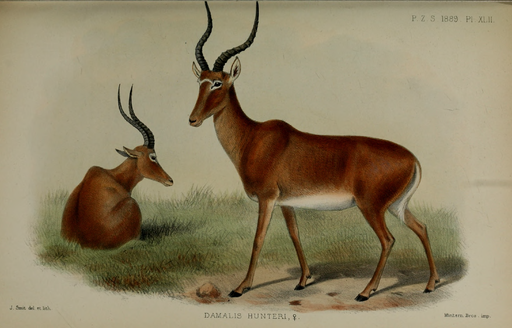 The hirola antelope is the current holder of the title of world’s rarest antelope. It is the last living representative of a 3 million year old evolutionary lineage, but is critically endangered. Living along the Kenya-Somalia border, its population consists of herds totalling fewer than 240 individuals.

Hirola antelopes must live in big groups in order to protect themselves from predators. Prior to the 1980s they did, but then livestock carried the disease rinderpest to the areas in which hirola lived. The disease, combined with a severe drought in 1984, decimated hirola populations, with numbers crashing from around 16,000 animals to fewer than 500. Since then, poaching and habitat loss has caused further decline.

In order to protect the hirola, The Nature Conservancy, the Kenya Wildlife Service, the Northern Rangelands Trust and community partners established the Ishaqbani Hirola Community Conservancy in 2006. Within the 19,000 hectare conservancy, rangers began monitoring the wildlife and started anti-poaching patrols. A sanctuary was built for hirola in 2012, and just before the predator-proof fence surrounding it was completed, 24 antelopes were herded into it. A further 24 hirola were then tranquilised and carried into the enclosure by helicopter.

With poaching under control and the habitat improving, the hirola population began to grow. In the first year only a few calves were born, one of which died, but breeding became much more successful in the following years. Recent aerial surveys show that in fewer than three years, 34 hirola have been born in the sanctuary. “A lot of people may not view 34 births in three years as significant, but with fewer than 240 hirola left in the world we’re talking about the difference between survival and extinction. Without immediate action like this community partnership, a mammal would go extinct for the first time on mainland Africa in modern human history,” said Matthew Brown, Africa Deputy Director of the Nature Conservancy.

The success of the sanctuary is largely credited to the support of the local community, who have benefited from job creation. The hirola share their home with the Pokomo community of Somali pastoralists who assisted with the creation with the sanctuary and the translocation of the antelopes. “They have an amazing connection to the hirola antelope,” Brown said. “They feel the animals are theirs to look after.”

Other species have also benefited from the conservation activities taking place. Species such as giraffe, zebra, lesser kudu, ostrich and gazelles have all began to significantly multiply. As for the hirola, it is the long term goal of the project to release animals bred within the sanctuary into the wild. The first release will take place in the next one or two years, after that the population will hopefully continue to grow. This will ultimately build a viable population, and enough animals to once again protect themselves from predation. “We’re probably looking at a 10- to 15-year recovery story,” said Brown.