Between May and July this year, the survey recorded 1,289 calling males – its highest population since records began.

By Alex Taylor on 20th October 2014 in Bird Conservation, Uncategorized 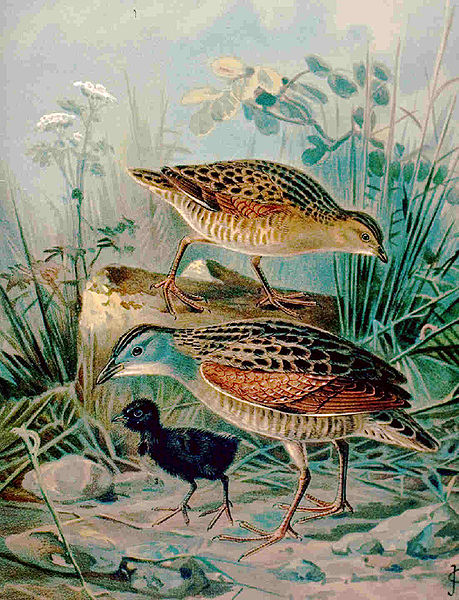 One of Scotland’s most elusive and endangered breeding birds has had its best breeding season for at least 45 years. The corncrake winters in Africa but breeds in Scotland, hidden in tall vegetation where they can safely raise their chicks. They are so well hidden that a recent RSPB survey counted them not by sight, but by their unique “crex crex” call, which also gives them their scientific name.

Between May and July this year, the survey recorded 1,289 calling males – its highest population since records began. The results were especially welcome as experts had actually predicted corncrake numbers would fall this year after they suffered a 23% decline in 2013, which was thought to be due to bad weather.

The corncrake was once common across rural Scotland and parts of the English fens where they rear their young on farmland. However, changes in agricultural practices during the 20th Century, including shifting to earlier mowing of hay meadows and silage fields, caused their numbers to plummet. In the UK they are now on the Red list of birds of high conservation concern. In the early 1990s it was estimated that there were only around 400 singing males concentrated only in the Inner Hebrides, Orkney and the Western Isles.

Since then RSPB Scotland, the Scottish Government and Scottish Natural Heritage have worked with farmers and crofters to improve the chances of corncrake survival. Leaving vegetation cover at field edges and leaving grass fields un-cut or un-grazed until August has provided more areas for the birds to nest in. Changes in mowing practices, such as mowing from the inside of the field outward, allows the chicks to escape and increases survival. Several nature reserves acquired by the RSPB are also being managed mainly for corncrakes, and now hold around 8% of the national population.

These measures are clearly working, and slowly but surely the shy corncrakes are staging a comeback. Paul Walton from RSPB Scotland said the figures were “fantastic” and added: “They are testament to the dedication of crofters, farmers, the conservationists working alongside them, and to the Scottish Government and SNH officials, who have helped target agricultural support to deliver this result for wildlife. However, last year’s fall in corncrake numbers was worrying and this bird remains highly vulnerable, so we can’t afford to be complacent. Even though there has been an increase in numbers this year, we have so far failed to expand the corncrake’s breeding range. They are still found in only a few isolated areas of Scotland, mainly on the islands, so that’s where we need to focus our efforts next. We also need to bring together the methods we’ve used for corncrakes and apply them to other Scottish birds that are in trouble, like the curlew and the corn bunting, to help secure their future in Scotland.”