Poachers are decimating their populations to sell ivory to markets in the Far East. The lesser sized, and lesser known, African forest elephants however are also on the brink of becoming poached out of existence.

By Alex Taylor on 24th April 2013 in World Conservation Issues 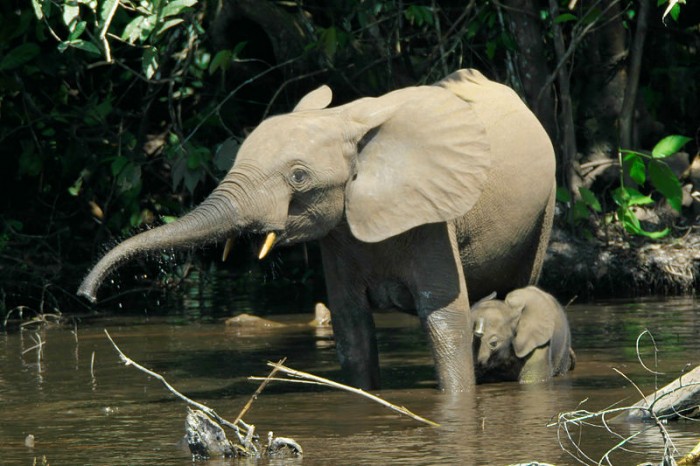 The plight of the African savannah elephant is well known – poachers are decimating their populations to sell ivory to markets in the Far East. The lesser sized, and lesser known, African forest elephants however are also on the brink of becoming poached out of existence.

A study published recently in the journal PLoS ONE shows that over the past decade 62% of all forest elephants have been killed throughout their range in central Africa. This rapid decline has led researchers to fear the imminent extinction of this species. This study was the largest ever to be conducted on the African forest elephant. It includes the work of over 60 scientists, carried out between 2002 and 2011. National conservation staff spent a combined total of 91,600 days surveying elephants in the Democratic Republic of Congo, Gabon, Cameroon, the Republic of Congo and Central African Republic. They walked more than 8,000 miles (13,000km) and recorded over 11,000 piles of elephant dung for analysis. During the course of the surveying, the density of these dung piles dropped dramatically, which was how the scientists calculated the decline in the forest elephant population.

Forest elephants are genetically distinct from the more widely dispersed savannah elephants – a study in 2010 proved that they are separate species. Forest elephants are smaller, by approximately 15%, and have harder and straighter tusks. These tusks still make them a target for ivory poachers but, although most ivory ends up in China, one study conducted by Wildlife Conservation Society (published in the journal Pachyderm in 2012) revealed that Japan is the only country to have a preference for the harder forest elephant ivory. The softer savannah elephant ivory is not considered to be durable enough to make personal name seals called hanko, or for bachi, a carved plucking tooth for musical instruments called shamisen.

The study also showed that almost a third of the land where forest elephants could live 10 years ago is now not suitable as it has become too dangerous. Where human density, infrastructure, levels of corruption and hunting intensity were high, and where law enforcement was absent, forest elephants were uncommon. They have a particular fear of roads, because these highly intelligent animals now associate them with danger because they are used by poachers. Unfortunately, this means that they are becoming increasingly confined and isolated to forest patches and, although they are usually far-ranging animals, their ability to find suitable habitat is now reduced.

The decrease in numbers of forest elephants also has implications for some tree species which depend on the elephants as seed dispersers and to open up areas of the forest floor. Evidence now indicates that several tree species are in decline due to local elephant extinctions, demonstrating the vital role these animals play in the functioning of their forest home.